TO VIEW PHOTO GALLERY, CLICK ON AN INDIVIDUAL IMAGE

BOSTON (CNN)-- The FBI on Thursday released photos and video of two men it called suspects in the deadly bombings at the Boston Marathon and pleaded for public help in identifying them.

The two men were photographed walking together near the finish line of the marathon before the explosions that killed three people and wounded about 180. One of the two men was seen setting down a backpack at the site of the second explosion, said Special Agent Rick DesLauriers, the head of the FBI's Boston office.

DesLauriers said the men should be considered armed and "extremely dangerous."

The announcement capped a day in which President Barack Obama brought a mixture of reassurance and defiance to an interfaith memorial service in the city's Cathedral of the Holy Cross. Whoever planted the bombs "picked the wrong city" to attack, he said. 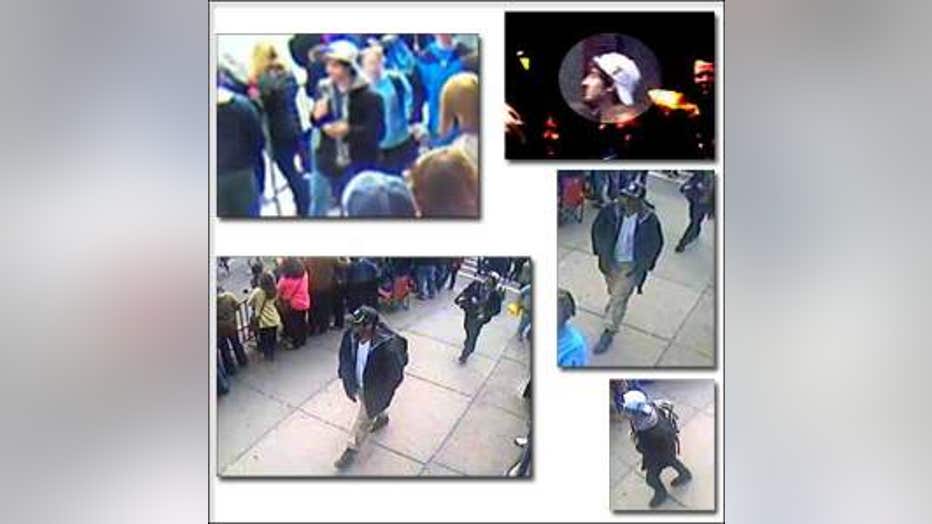 "Every one of us stands with you," Obama told the crowd. "Boston may be your hometown -- but we claim it, too. ... For millions of us, what happened on Monday is personal."

Addressing the still-unknown perpetrators, Obama added, "Yes, we will find you. And yes, you will face justice. We will hold you accountable." And he looked ahead to next year's race, predicting that "the world will return to this great American city to run even harder and to cheer even louder for the 118th Boston Marathon. Bet on it."

Among the crowd of about 2,000 were first lady Michelle Obama; the president's Republican challenger last November, former Massachusetts Gov. Mitt Romney; the state's current governor, Deval Patrick; and Boston Mayor Thomas Menino. During an interlude, attendees were soothed by a performance by famed cellist Yo-Yo Ma.

Menino praised each of the three bystanders who were killed in the blasts -- Martin Richard, described as a "young boy with a big heart"; Krystle Campbell, whose spirit "brought her to the marathon year after year"; and Lingzu Lu, who "came to the city in search of an education."

The audience also included scores of police officers and other first responders. Crowds erupted in cheers as the cathedral emptied out at the end of the service, while others sang the national anthem.

Obama later stopped at a high school to thank a group of first responders and volunteers, and the first lady met with patients, families and hospital staff at Boston Children's Hospital and Brigham and Women's Hospital, the White House said.

Meanwhile, behind the scenes, investigators were combing through surveillance video dating to at least a week before the bombings to try to identify anyone who walked the finish-line route before the race, said a source who receives regular updates on the investigation.

The One Fund Boston: Massachusetts Gov. Deval Patrick and Boston Mayor Tom Menino established this fund after the attack if you wish to donate to the victims of the bombings. Visit onefundboston.org to contribute.