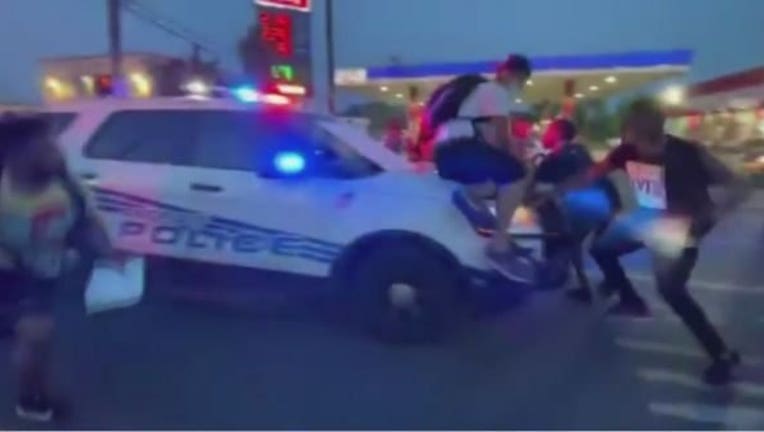 In the user footage, a squad car surrounded by dozens of individuals starts to accelerate erratically as people refused to get out of the way. With some individuals ending up on the hood of the squad car, it speeds off and sends two individuals flying from the hood. A third demonstrator still hanging on is also eventually thrown from the vehicle as well.

It's the first violent encounter between police and protesters in weeks. Prior to Sunday's incident, interactions between to the two parties had been relatively peaceful.

The clip itself has been shared more than 13,000 times on Facebook, drumming up the typical commentary from audiences as the clip made the rounds on social media. The standoff was graphic enough it even warranted a disclaimer from Facebook itself, which warned viewers "the video may show violent or graphic content."

Click "See Video" and the first scene shows chanting and a distant drumbeat, along with the constant whir of a police siren. The squad car in the video had been moving forward when one of the dozens of protesters surrounding the vehicle laid on the hood. As the camera rotates around the crowd and the protester hops on the vehicle hood, its wheels begin to spin faster - accelerating in bursts.

More people begin to shriek as about 10 demonstrators and the person holding the camera find themselves at the mercy of an accelerating police car. Several individuals appear to be flung to the sides of the moving squad car; one protester is on the ground next to its wheels while three more are on still on the hood. The officer accelerates again, forcing two of the three protesters off the hood.

One more acceleration happens, this time it carries the person hanging on for about 20 feet before they roll off the hood. People scream and give chase as the vehicle drives away.

Police spokesperson Sgt. Nicole Kirkwood said officers were trying to redirect traffic when the protesters became agitated. As a few protesters jumped on the hood of the vehicle, another busted out the car's back window. Detroit Police Chief James Craig is expected to address the incident during a 1 p.m. press conference.

Racial unrest and citywide protests have been peaceful in Detroit, Craig has boasted, attributing the fall in property crimes to a lack of violence during the gatherings which have swept through America's urban centers. That wasn't necessarily the case Sunday night, however.

Even as the size of the protests in Detroit has declined in recent days, hundreds of people were still spotted gathering to demonstrate last night. As the rally traveled down Vernor Highway, police watched from a safe distance. The clash between protesters occurred when demonstrators had turned around and were walking back.

The first few days of protests in Detroit were tense, kicking off at the end of May and early June. Starting up as the sun would set, demonstrators and law enforcement armed in tactical gear would clash downtown and on the outskirts of the city center. Protesters would later claim police deployed excessive force, arguing that tear gas and rubber bullets injured people. Chief Craig says officers had projectiles thrown at them, eventually leaving one with a concussion.

Since then, more peaceful displays of protest have been led. Organizers with Detroit Will Breathe, the group spearheading many of the protests have met with police and held public tribunals where they put high brass of Detroit government on trial.