(CNN) -- A Lion Air flight carrying about 100 people ended up in the Indian Ocean while attempting to land at Bali International Airport on Saturday, officials said.

Only one person was immediately confirmed as having suffered injuries, Lion Air spokesman Edward Sirait said at a news conference in Jakarta following the incident.

Eighteen people were taken to the hospital to be checked over, Sirait said.

The airline, which operates under the official name Lion Mentari, was already banned from European airspace due to safety concerns, according to the European Union.

Sirait said the plane is a new one and that the pilot was fit to fly. Lion Air crew can fly a maximum of eight hours per day, he said.

The plane had flown earlier in the day from Palu, Central Sulawesi, to Banjarmasin, Kalimantan; it then proceeded to Bandung and then Bali, Sirait said.

It's not clear whether the same pilot was flying the aircraft the entire time.

Doug Sovern, of KCBS Radio in San Francisco, was at the airport when the incident happened.

He described seeing the plane, with a big crack splitting the fuselage in two, off the end of the runway in the Indian Ocean.

"Amazingly they were able to get everyone out of the plane," he told KCBS Radio, adding that he didn't see any rescue chutes.

"We saw a lot of fire engines and ambulances. We were told there were some minor injuries," he said.

The plane appeared to be more than 100 feet out into the ocean, he said, but it wasn't too far for people to get back to land. The fuselage now seems to be sinking into the water, he said.

At first people feared the worst, he added, but it now seems the passengers and crew have had a fairly miraculous escape -- with shades of the "Miracle on the Hudson" in New York. 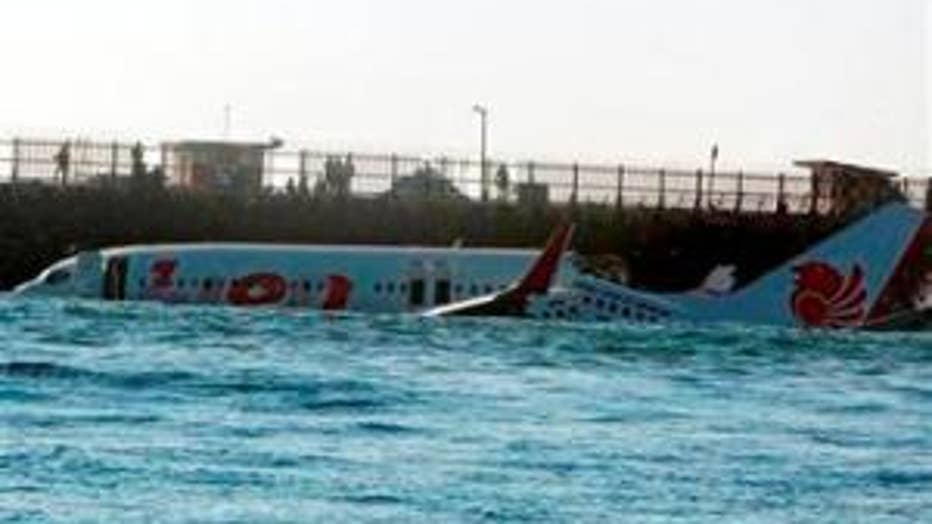 In that 2009 incident, Capt. Chesley "Sully" Sullenberger was forced to make an emergency landing on the Hudson River after his Airbus A320 collided with a flock of geese and lost thrust 2,700 feet over Manhattan. Everyone was rescued.

In late 2011, Boeing made its largest single aviation sale -- 230 planes totaling $21.7 billion -- to Lion Air, a domestic airline virtually unknown outside of the archipelago nation of 6,000 inhabited islands.