Deputies with the Pierce County Sheriff's Department (PCSD) are being praised for how they deescalated a situation involving a man experiencing a mental health crisis last summer.

PUYALLUP, Wash. - Deputies with the Pierce County Sheriff's Department (PCSD) are being praised for how they deescalated a situation involving a man experiencing a mental health crisis last summer.

On June 16, a man was having a mental health episode inside the IHOP on 176th St. E and Canyon Rd. E in Puyallup. Crews with Central Pierce Fire and Rescue (CPFR) arrived at around 12:15 p.m., but called deputies to assist when the man became agitated. Crews told deputies that the man was possibly hallucinating, and believed people were trying to harm him. There was a moment when fire personnel became concerned that the man would become aggressive toward them. 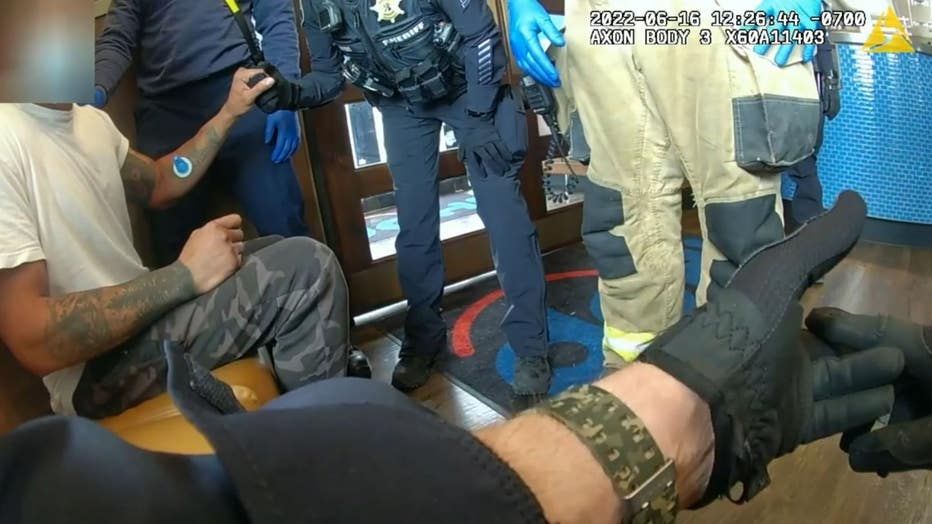 When deputies arrived, their response was "kind, respectful, caring and compassionate". In the video, deputies can be seen helping the man calm down, making him feel comfortable about receiving care.

The CPFR wrote a commendation letter to the PCSD:

"As your Officers arrived, Deputy Inga Hess began to immediately deescalate the situation. Upon your arrival, the methodical, calm, professional and genuinely caring approach to the patient changed the whole vibe on the scene. The patient was visibly, continuing to feel more at ease."

After calming the patient down, deputies safely brought him to the Recovery Response Center in Fife.

"Because of the genuine concern, deescalation techniques and professional approach delivered by your Deputies, this interaction, by my definition, is another model example of how a response to behavioral emergencies should occur."

It is unknown what led up to the man's mental health crisis.