MALIBU, Calif. (KTLA) — A scenic ride along a stretch of Mulholland Highway ended in a terrible crash Saturday, when a motorcyclist accidentally plowed into a pair of cyclists.

The horrifying accident was caught on video by photographer Ken Snyder; he posted the video to YouTube Sunday.

In the video, you can see a man riding his motorcycle on Mulholland Highway near Malibu coming around a bend known as "Dead Man’s Turn" when he then hits two cyclists from behind. Miraculously, they walked away from the crash with only a few cuts and bruises.

One person who left a comment on YouTube said the cyclist who was struck first was a friend of his who was visiting from England. 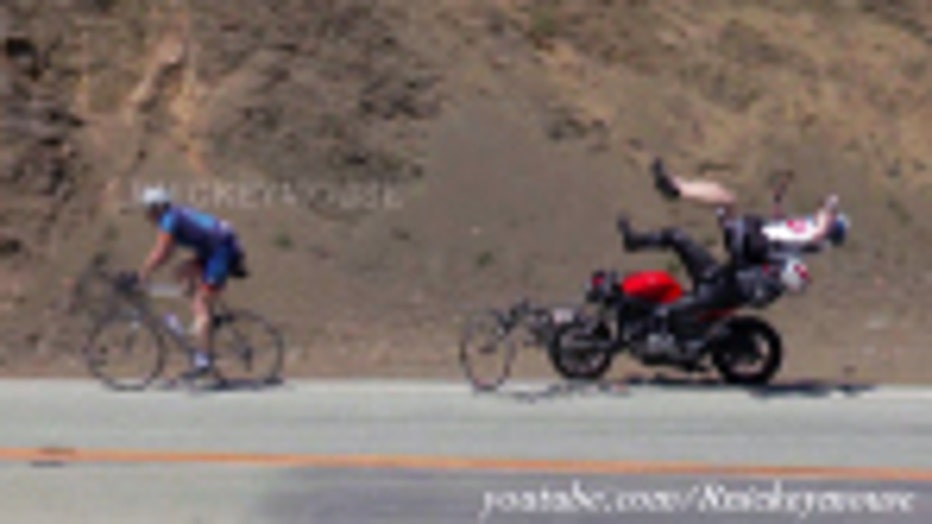 He said his friend was taken to the hospital, but was released a short time later with no broken bones.

The popular stretch of highway is known as “The Snake” by the motorcycle community and “Rockstore Climb” by cyclists.

Snyder makes motorcycle riding videos and said he often sets up his camera there and just happened to catch the crash.

Lifelong cyclist Gary Wolfe said he’s familiar with the windy piece of highway — and the danger it presents.

“It’s one of the best roads to ride for any bike. As a team we ride that at least once, minimum.” he said. “That turn — guys come flying around that turn either up or down. You just sit there and I think every weekend you get someone on a motorcycle crashing.”

It’s not clear if the motorcyclist will face any charges. The California Highway Patrol is investigating the crash.