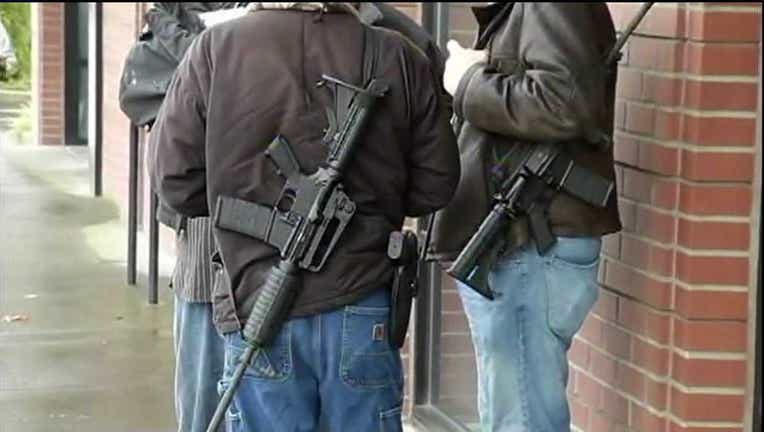 PORTLAND, ORE. (KPTV) -- Two men carrying assault rifles on their backs said they were simply exercising their Second Amendment right, but police said they scared plenty of people.Calls started coming in to 911 dispatchers shortly before 2 p.m. Wednesday. Callers said two men with guns strapped to their backs were walking through the area of Southeast Seventh Avenue and Spokane Street in Portland's Sellwood neighborhood.

Officers arrived in the area and contacted both 22-year-old men. They were carrying rifles openly on their backs and were valid concealed handgun license holders in Oregon.

The men told officers they were hoping to educate the public about gun rights.

Officers explained that they were likely to continue generating 911 calls from alarmed people in the area, which would require a police response. Officers reported neither man seemed interested in those concerns.

"Exercising my rights with a rifle to try to decrease the demonizing of peacefully exercising your rights in public," one of the men told Fox 12. He said his name is Warren, but did not want to provide a last name.

Officers said carrying firearms openly is legal in Oregon and carrying a concealed gun is legal with a valid license. However, doing one or both may generate 911 calls and possibly tie up resources that are needed for a true emergency.

Warren said he hoped people would approach them and talk to them, instead of calling police.

"What they really should do is observe the person to determine if the person is aggressive," he said of seeing someone with a gun in public. "We're not doing anything threatening to anyone."

The Portland Police Bureau, however, asks anyone who sees someone armed with guns to immediately call 911.