Hail pounded the car windshield of Jake Nea, a self-described novice storm chaser, in the town of Roosevelt, Oklahoma, on Sunday night, Oct. 10, as severe storms blew through the state and produced several tornadoes. (Credit: Jake Nea via Storyful)

ROOSEVELT, Okla. - A driver shared a shocking video of his shattered windshield while driving through a hail storm in Oklahoma on Oct. 10.

As severe weather ripped across the state Sunday night, Jake Nea, a self-proclaimed amateur storm chaser, was in Roosevelt, Oklahoma when several tornadoes touched down near the area.

Video taken by Nea from inside the vehicle shows large cracks forming on the glass as it was struck by the hail.

A photo tweeted by Nea on Monday showed the extent of the damage to his car. "That was a new windshield," Nea wrote.

The National Weather Service confirmed multiple tornadoes in Oklahoma, noting how the weather conditions were prime for their quick development. Baseball-sized hail was also reported in parts of the state but there were no reports on Monday of deaths or injuries.

"Take cover from this storm now!" the National Weather Service in Tulsa warned on Twitter, saying that the storm was strengthening quickly.

Coweta Public Schools canceled classes on Monday and said that officials were surveying the school sites for storm damage. 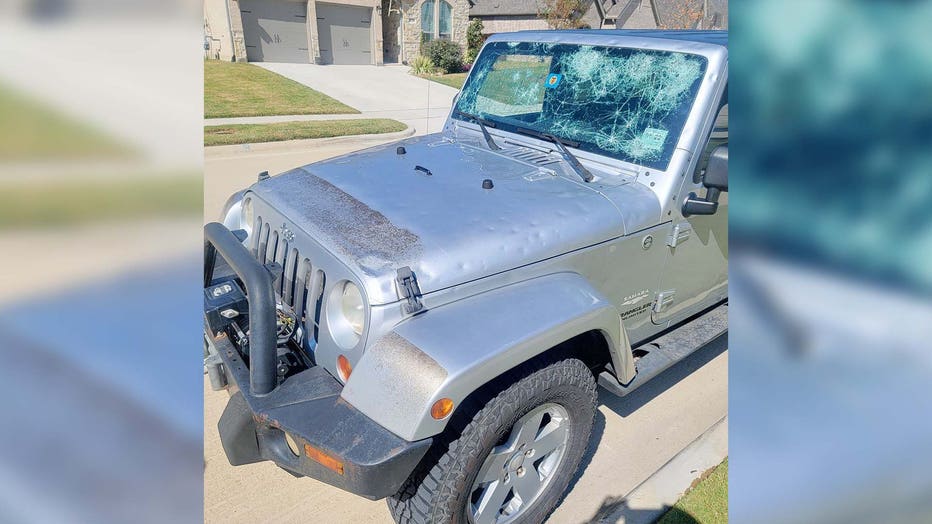 Building damage was also reported in Anadarko, about 50 miles southwest of Oklahoma City.

Kelly Hayes and Storyful contributed to this report. This story was reported out of Los Angeles.