A garbage truck in Indianapolis, Indiana, burst into flames shortly after the top of the truck slammed into an overpass on Nov. 28, 2022. Credit: Mark Salcedo Jr via Storyful

INDIANAPOLIS - Dramatic video captured a garbage truck that slammed into an overpass this week in Indiana, causing the vehicle to burst into a giant ball of fire.

The moment, which was reported just before 8 a.m. local time on Monday in Indianapolis, was recorded by a nearby surveillance camera. The video shows the blue garbage truck driving down a street and toward the overpass, before its top slams into the bridge. Debris and smoke are seen in the underpass following the impact.

Within seconds, a bright explosion soon appears — appearing to engulf the entire area.

Mark Salcedo Jr., whose family owns the nearby Superior Towing business with the surveillance camera, told FOX 59 that truck drivers commonly underestimate vehicle height and collide with the bottom of this overpass — which only has an 11-foot, 8-inch clearance.

Located over E. New York Street on the city’s east side, Salcedo said it usually happens once or twice a month. His Instagram page features previous incidents of unlucky vehicles colliding with the overpass.

Salcedo lives in a house next to the business and told the local news outlet that he was upstairs getting ready for work when the impact of the crash caused the house to shake so much it "almost knocked me over." 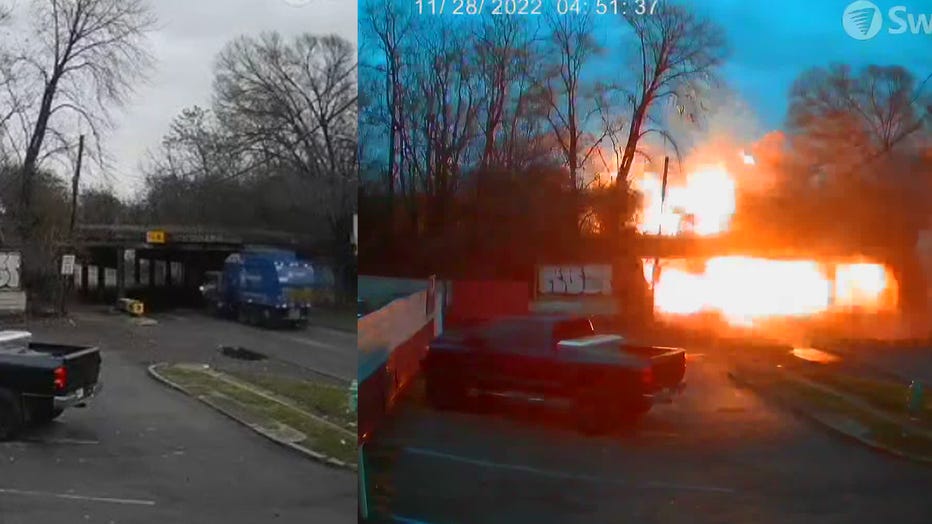 Screengrabs from a video show a garbage truck in Indianapolis, Indiana, approaching the overpass before bursting into flames on Nov. 28, 2022. Credit: Mark Salcedo Jr via Storyful

He called the garbage truck crash the "second worst" he’s experienced in the eight years he’s lived there, followed by the impact of a cement truck that hit the overpass.

The Indianapolis Fire Department responded to the fire. FOX 59 and WTHR-TV both reported that no one was seriously injured, including the driver of the truck.

Salcedo told the local news station that he saw the truck driver walking around after the flames died down.

His advice for drivers? "Know your height."