TACOMA -- A man convicted of attempted murder appeared in court for a re-sentencing hearing, but apparently he didn't want to wait around to hear it.  To the surprise of those in the courtroom gallery, he made a break for it in handcuffs. It was all caught on the courtroom's video camera.

Deondre Posey took off running with his hands cuffed in front of him, and corrections deputies close on his heels. But Posey fell down before he could reach the door.

The gallery was full of people there to witness his re-sentencing and for other cases.   They started yelling and pushing when Posey tried to escape so deputies moved them into the hallway where Pierce County Sheriff Paul Pastor helped restore order.

Pierce County sheriff's detective Ed Troyer says,  "These were all known gang members and we wanted to make sure nobody got hurt so we forced them out in the hallway.  We had to apply Taser applications to a couple of people, but we got two people in jail and the suspects back in custody and going back to prison where he belongs. We did get some minor bruises, cuts, sprained fingers so it wasn't without total injury but we had nobody seriously hurt. We're lucky.

"We're glad our safety plan worked so anybody should know if you're going to try and escape out of the county city courtroom or help somebody or cause a problem, you're going to be met by our people who have plans in place to make sure it doesn't happen,” Troyer said.

Posey was originally sentenced to 33 years for a shooting that left a man paralyzed. His re-sentencing, which was expected to bring him more than 20 years in prison, has been rescheduled. 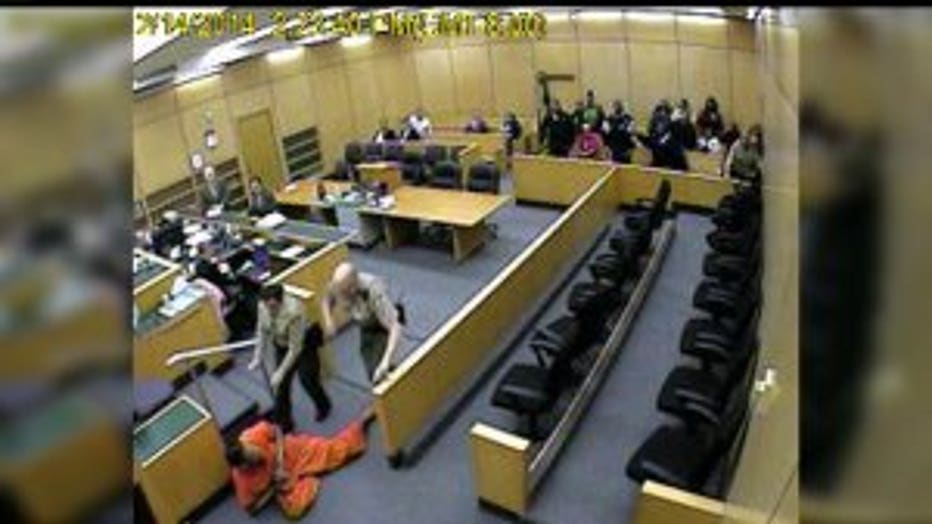