Woman throws shoeboxes after being asked to put on mask

A woman, apparently upset after being asked to wear a mask, was filmed throwing shoeboxes at a shoe store employee in Oklahoma.

OKLAHOMA CITY, Okla. - A woman apparently upset about a store’s mask policy in Oklahoma was captured on video throwing boxes of shoes at an employee in an outburst of anger.

The incident was reported July 8 at a Skechers store in Oklahoma City. The employee told police that the customer entered the store without a face mask and was told several times that she must wear one, according to FOX25.

The employee said a sign on the front door states that masks are required amid the coronavirus pandemic, but the woman ignored their requests and continued shopping.

Once the customer walked up to the counter, the employee suggested that the woman go to a nearby Lowe's and purchase a mask, and then come back to buy her shoes, according to the news station.

The woman became angry at the suggestion, throwing shoe boxes at the employee before exiting the store, FOX25 reported. 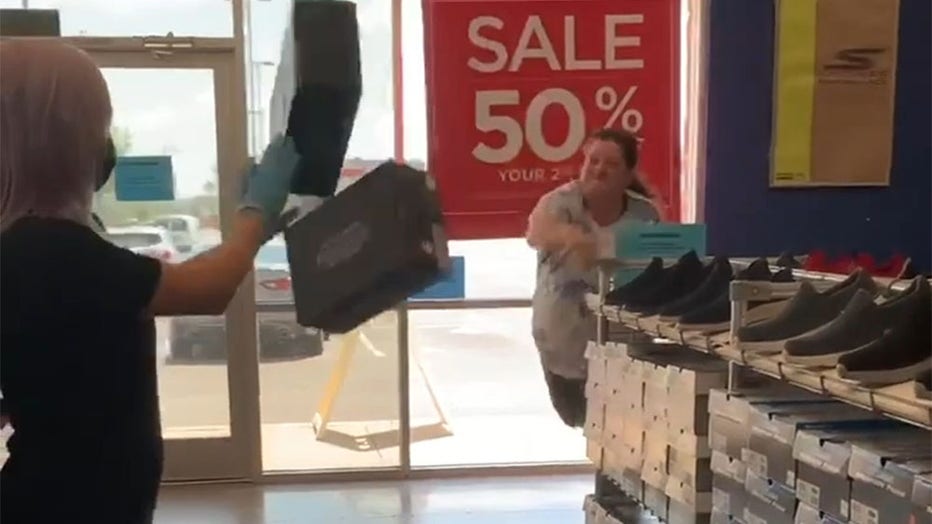 One of the Skechers employees, Myah Joycelynn, captured video of the incident and posted it on Facebook.

“All we wanted was for her to wear a mask,” Joycelynn wrote in part. “I hope this lady is embarrassed of herself and her actions.”

Police were able to identify the customer after the assault because she left her wallet on the counter with her identification, according to the station.

Official health guidance from the Centers for Disease Control and Prevention states that everyone should wear a cloth face covering in public settings, especially when other social distancing measures are hard to maintain.

Last week, a passenger on Spirit Airlines was removed from a flight for refusing to wear a mask. Video of the incident was shared on Twitter.