Footage provided by Mario Robinson shows an officer striking Latinka Hancock while another points a Taser at her in a McDonald's parking lot.

DAYTON, Ohio - An Ohio police officer has been put on administrative leave after video showed him punching a Black woman several times as she was taken into custody following a dispute at a McDonald’s over extra cheese on a Big Mac.

The incident, captured on video by a bystander, occurred shortly after 4 p.m. Monday at the restaurant in Butler Township, Ohio. It began after Laticka Hancock, 31, of Dayton, bought a Big Mac and returned to the restaurant a short time later because it did not have the extra cheese she paid for.

Hancock said a restaurant worker asked another employee to remake her burger, but that person later asked Hancock to pay more for the extra cheese. Hancock said she had already paid for it and asked for a refund, which she says she eventually received.

Hancock said she was then told police had been called and was asked to leave the restaurant. Two Butler officers — Sgt. Todd Stanley and Tim Zellers — responded there around 4:20 p.m. and approached Hancock, who spoke with them about what had occurred.

When the officers asked Hancock for her driver’s license, authorities say Hancock told them she didn’t have one and refused to provide her identification. The exchange soon became heated, and one of the officers decided to place Hancock under arrest.

The officers said Hancock resisted arrest, and Stanley eventually hit Hancock on the right side of the face with an "open palm strike." Hancock was then placed in handcuffs, put into a police cruiser and charged with resisting arrest and three other minor counts. Authorities said Hancock was bleeding from her mouth and was treated by an EMT who determined the wound was superficial. 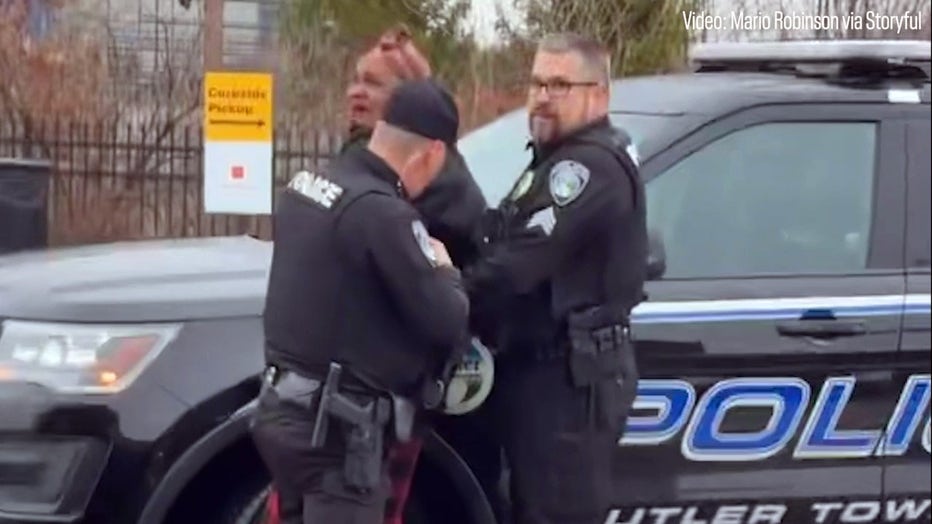 Stanley has served on the Butler force for more than 22 years, while Zellers has served for about 2 1/2 years. Butler Police Chief John Porter said Stanley has no formal reprimands in his personnel file and was placed on leave as a result of repeated correspondence from concerned residents, including "a lot of hate emails and phone calls."

Zellers has not been placed on leave, Porter said.

Hancock and her attorney, Michael Wright, held a news conference Wednesday to discuss the incident. Hancock said that she felt like she could have lost her life over a sandwich and felt lucky that she was able to now tell her side of the story.

"I don’t want people to feel like I’m complaining for a piece of cheese," she said.

Wright said the responding officers "were looking for a fight, rather than to deescalate."

He called for Stanley to be fired and charged with assault. He also criticized the restaurant for calling police over the dispute.

"If they can’t manage basic customer service, opting to potentially put a person’s life in jeopardy over a mishandled Big Mac, it doesn’t seem safe for Black people to go and eat at McDonald’s anymore," Wright said.

Wright said no decision has been made yet on whether a lawsuit will be filed, noting that his firm was waiting for additional videos inside McDonald’s and more information from police.

McDonald's did not immediately respond to an emailed request for comment Thursday evening.