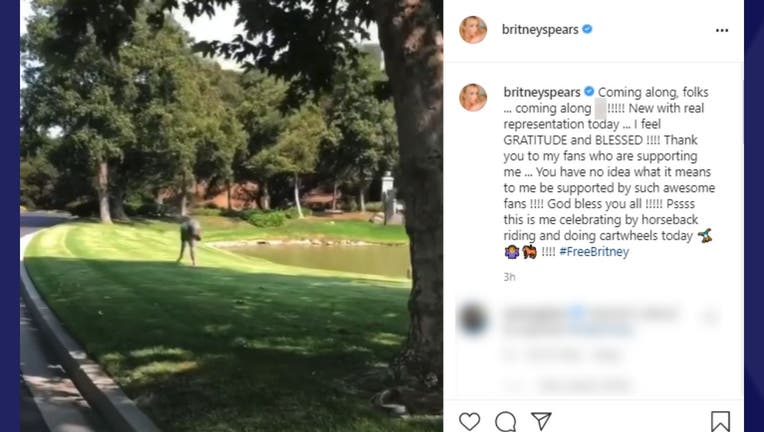 Shortly after a judge gave the singer the green light to appoint her own lawyer in the ongoing conservatorship battle, Spears took to Instagram to address her fans with the hashtag, #FreeBritney.

Spears reacted to Wednesday's ruling by going horseback riding and doing cartwheels outside as a way to celebrate her newfound ability to handpick an attorney in her push to kick her father out of the conservatorship.

Judge OK's Britney Spears to hire her own private attorney

Three weeks after Britney Spears' impassioned court appearance demanding an end to the conservatorship that has governed her life for 13 years, a Los Angeles judge approved the singer's request to hire her own attorney rather than have one appointed for her.

Rosengart called for Britney’s father to voluntarily step down, but his attorney said that wasn’t going to happen.

The singer said she wants to retain Jodi Montgomery as her personal conservator.

"I’m not lying, I just want my life back," Spears told the Los Angeles Superior Court judge, Brenda Penny, in a virtual court during the June hearing. "I want to end the conservatorship without being evaluated."