(FOX NEWS) -- An unidentified 30-year-old man was attacked in front of his wife and child in New York City after his vehicle was pursued by a gang of motorcyclists in a high speed chase.

It is not clear what started the altercation, but a video apparently taken by one of the bikers shows the gang surrounding the man's Range Rover SUV on Manhattan's West Side Highway Monday afternoon, the New York Post reports.

In the video, at least one biker is seen slowing down and parking his bike in front of the man's vehicle, causing him to stop. Another biker began walking toward the vehicle before the driver gunned it and smashed into several bikes and riders.

The group then pursued the driver at high speeds until he was slowed by traffic. At that point, another biker tried to rip open the SUV's door, but the driver sped off again.

The chase came to an end in the upper Manhattan neighborhood of Washington Heights when the driver was caught in traffic a second time.

One biker in the video is shown ripping off his helmet and using it to smash the driver-side window of the SUV. Police sources told the New York Post that the man was slashed in front of his wife and child, who were inside the vehicle.

The man was brought to Columbia Presbyterian Hospital to get stitches. 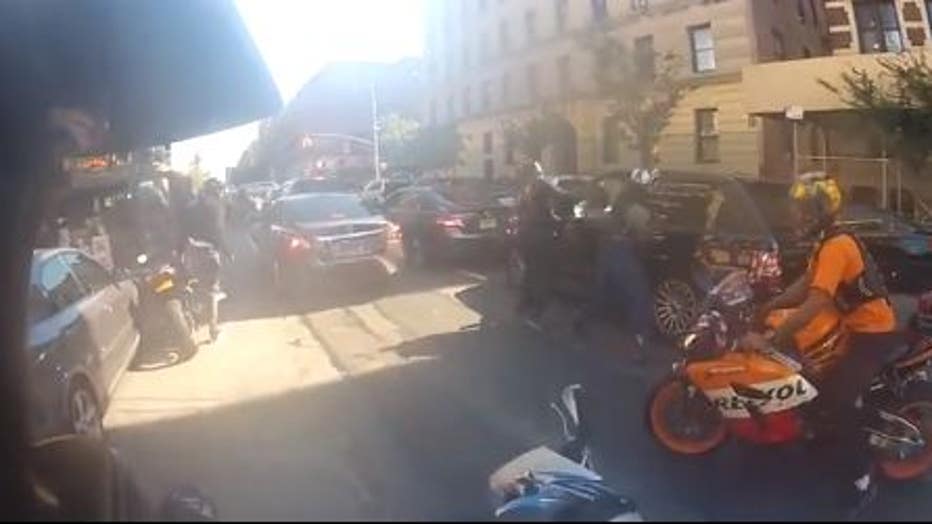