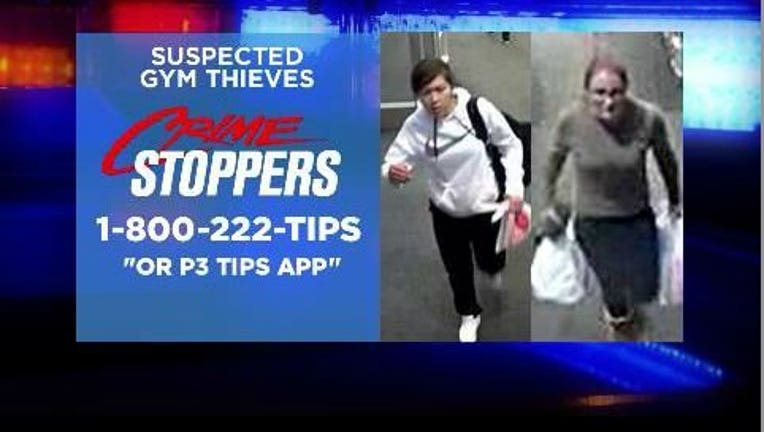 PUYALLUP, Wash. -- While their victims exercised inside LA Fitness in Puyallup, Pierce County sheriff’s detectives say thieves are using the time to strike.

“This is unique in that usually when you go to the gym and lock your stuff up with a lock, you expect it to be safe,” said Pierce County Sheriff’s Detective Ed Troyer.

Investigators said one of the suspects is caught on surveillance at the Puyallup Target spending several minutes at the register, then walking out with bags in tow. The victim said the thief rang up an estimated $2,400 on the stolen cards.

“I just feel violated that someone would just take my stuff like that,” said Murrell.

Murrell says in the 10 minutes she went to the sauna, someone broke into her locked locker, stole her car keys, then her car.

“They have my address, they have the keys to my vehicles,” said Murrell. “That night I stayed up the whole night wondering if they are going to come here and take my stuff or take my vehicles.”

Investigators said the suspect in Murrell’s case also went to the nearby Target and left with a bag. The Murrell's recovered the car in the Target parking lot, but the wallet and a loaded pistol weren’t inside. "Right now, we have this female that`s out there doing car prowls, but this one`s unique, in that she went and took the keys out of a gym locker at a fitness club then stole the vehicle, then took the credit cards, went in, committed fraud and took a gun from the vehicle, so we have somebody that`s habitual out there doing this," says Pierce County Det. Ed Troyer. "We have a picture of her and now, she and somebody that`s in that world is armed and we want to get her caught. We want to recover the weapon, because that’s the wrong hands for a weapon to be in and that’s somebody out committing a crime on a daily basis."

The Murrell's say it’ll be hard working out in peace until the thieves are caught. “I know they don’t have no respect for me or anybody else but it’s going to catch up to them, and I hope they get what they deserve once it does."