"Over the past two weeks, I’ve listened. I’ve listened, in person, to Terri and our kids, my business partners and probably more than three hundred other people from across the political spectrum. They all share the same view that Congress is broken and needs fresh leadership. Almost all of them urged me to run because they think that my skill set can help our communities and our country," Rossi, 57, of Sammamish, wrote on his Facebook page Thursday night.

"I've also looked at the realities of this Congressional district in 2018. I've run in this district and won it handily, but I'm not kidding myself; it's going to be a tough race. The opposition will throw everything they can at me, and we all need to pull together to win," he said.

"In the coming weeks, I’ll have more to say about what I hope to accomplish if elected. Today, I give you my promise -- I will listen, and I will work hard every single day to be the Representative you deserve," he wrote.

Rossi, who was a state senator from 1997 through 2003, was known for his work on the state budget. Rossi ran for the governor's office in 2004 and 2008, both times against Democrat Christine Gregoire, and lost. He also ran for the U.S. Senate against Sen. Patty Murray, D-Wash., in 2010, but lost that race, too.

On July 11, 2012, Rossi was appointed to fill the term of Senator Cheryl Pflug and left office in November 2012. After redistricting and the 2016 death of state Sen. Andy Hill, Dino Rossi was appointed by the King County Council to Hill's 45th District state Senate seat. He served in Olympia during the 2017 legislative session.

The 8th Congressional District includes the eastern portion of King and Pierce counties, but also extends east to Leavenworth, Wenatchee, Chelan, Cle Elum and Ellensburg; it has voted Republican for congressional seats. But the district was carried by Hillary Clinton in 2016 and former President Barack Obama in 2012. 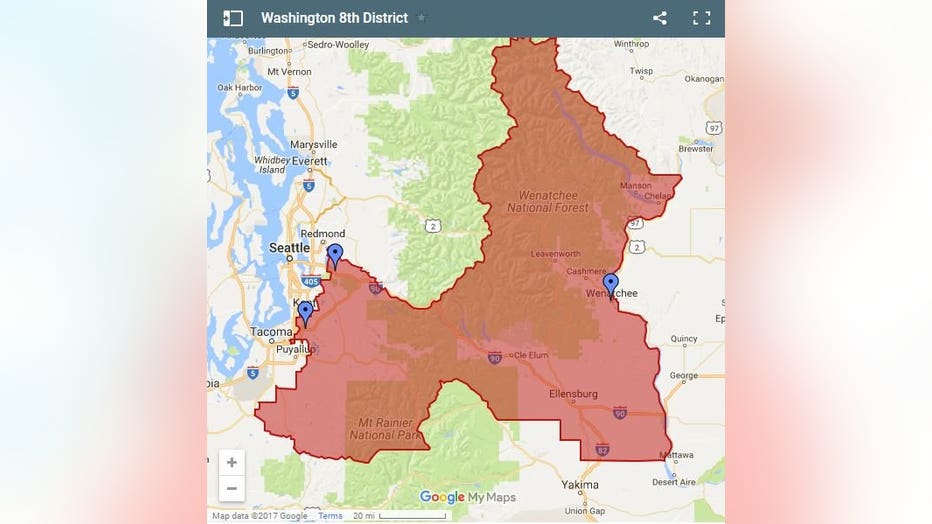