A team of independent investigators presented new evidence that points to who the infamous Zodiac Killer is. However, law enforcement agencies say the identity of the killer remains a mystery.

SAN FRANCISCO - A group investigating the cold case of the Zodiac killer has named a person they believe is a "very strong suspect" in the unsolved killings that terrorized San Francisco and the Bay Area in the 1960s and beyond.

The Case Breakers identified a now-dead man as the likely Zodiac, citing supposed matching facial scars among photos of their suspect and sketches of the Zodiac.

The team, which counts retired law enforcement officers and forensic experts among its members, named Gary Francis Poste as the Zodiac suspect. However, Poste has not been named by a police department.

"We have six people that he told, toward his last years," that he was the Zodiac," Tom Colbert of the Case Breakers told KTVU.

Poste, an Air Force veteran and professional housepainter, died in 2018.

Poste is among many men who have been variously identified as the Zodiac over the past few years.

"Hey, everybody has a theory, that's fine," Colbert said. "We have evidence that's out the kazoo. It's amazing. We have tons of evidence."

That evidence, he said, includes a shoe-size match and court affidavits from witnesses whom Poste admitted to being the Zodiac.

Authorities have linked five Bay Area killings in 1968 and 1969 to the so-called Zodiac, who came up with the name himself in a series of cryptic messages sent to newspapers. In those letters, the supposed killer claimed the death toll was higher. 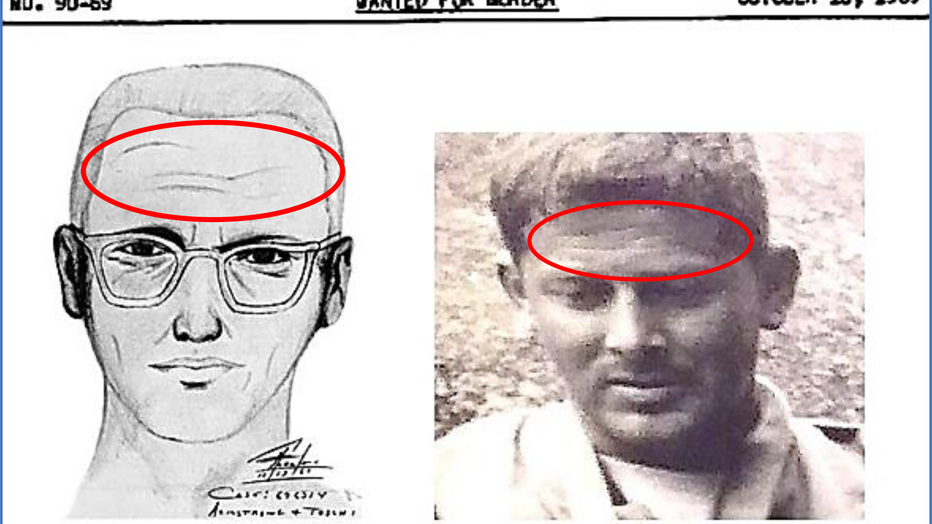 The Code Breakers point to similarities in the forehead scar of the Zodiac sketch and the photo of Gary Poste, a deceased Air Force veteran they have called a "very strong suspect" in the unsolved Bay Area killings.

Among those victims, the group accused Poste of a homicide in Riverside, Calif.,  in 1966 that they believe has special significance to closing the book on the Zodiac.

The Case Breakers say that an alleged confession written by the Riverside killer shows remarkable similarities to a letter written by the Zodiac. They also said that Poste's full name is part of the code in one letter.

"His name is Poste. He ended it with the stamp, and they couldn't figure out his last name. He cleverly used the postmarkings as Gary Francis (stamp) Poste," Colbert said.

He said Poste also had scars from a 1959 car crash that match scars on a sketch of the Zodiac.

"That is irrefutable," Colbert said. "That is a mark that's the same. It's on him all the way up to his death at 80 years old."

Evidence from the Riverside killing should be compared to Poste's DNA that is held by the Vallejo Police Department, according to the Case Breakers. Vallejo is a location of interest in the Zodiac case, because the fatal shooting of a woman and wounding of a man there have been blamed on the Zodiac.

The Riverside Police Department, however, said to Fox News that it has determined that the 1966 killing of Cheri Jo Bates was not committed by the same murderer responsible for the Bay Area killings.

The case, which is still considered open by the FBI's San Francisco office, has spanned rampant theorizing with books, films and online groups attempting to solve the case and decipher the coded letters allegedly penned by the killer.

A group of specialists, including retired law enforcement and military officers, says it has identified a "very strong suspect" in the Zodiac killer case. The group says that the Zodiac's cryptic letters identified the killer, who also had a facial scar that matched a scar in the police sketch of the Zodiac.

Last year, another group of sleuths claimed to have cracked the a well-known cipher written by the Zodiac that was sent to the San Francisco Chronicle.

"I hope you are having lots of fun in trying to catch me," part of the message said. "I am not afraid of the gas chamber because it will send me to paradise all the sooner because I now have enough slaves to work for me."

Chronicle reporter Kevin Fagan, who's been covering the Zodiac case for years, says he's been told by knowledgeable sources that Poste may not be the suspect.

"Who are we to say yea or nay?" Fagan said. "I got an email two weeks ago saying they found Herb Caen's name in the anagram. So Herb Caen must be the Zodiac. Before that ,it was Charlie Manson."

The FBI San Francisco office, SFPD and Vallejo police all said Wednesday that the Zodiac case remains open and that they could not comment on any potential suspects.

"Due to the ongoing nature of the investigation, and out of respect for the victims and their families, we will not be providing further comment at this time," the FBI said.