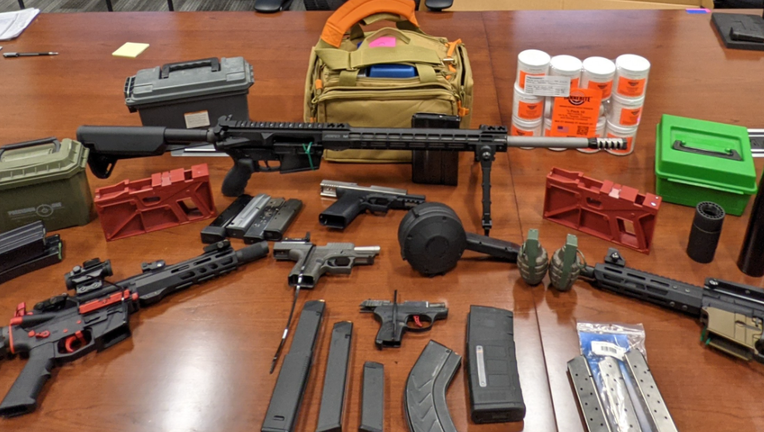 According to the FBI Seattle Division, 46-year-old Joao Ricardo DeBorba, a Brazilian National with multiple convictions for domestic violence assault, was arrested Friday on eight counts of illegal possession of firearms. He is being held at the Federal Detention Center in SeaTac pending further court proceedings.

Authorities say last week, law enforcement served a search warrant at DeBorba’s residence and seized five firearms that did not have serial numbers or manufacturers’ marks. Three of the so-called "ghost guns" were AR-15 style rifles and the other two were handguns, all believed to have been purchased online. In addition to the guns, authorities found a large amount of ammunition, a workbench with firearms parts and tools, firearm silencers, magazines and gun cases.

RELATED: Ghost guns: What are they and why they are an issue nationwide

According to the criminal complaint, DeBorba has a history of illegally purchasing firearms:

The case is being investigated by the FBI, with assistance from the Vancouver Police Department, U.S. Immigration and Customs Enforcement, the Bureau of Alcohol, Firearms and Explosives, and the Social Security Office of Inspector General.

The charges contained in the complaint are only allegations, and DeBorba will be presumed innocent until proven guilty in the court of law. If proven guilty, DeBorba could face up to 10 years in prison and a $250,000 fine for illegal firearms possession.

The Seattle Police Department recovered 161 firearms in March, according to Chief Adrian Diaz, which he said is the third-highest number of guns officers have recovered in the last decade.