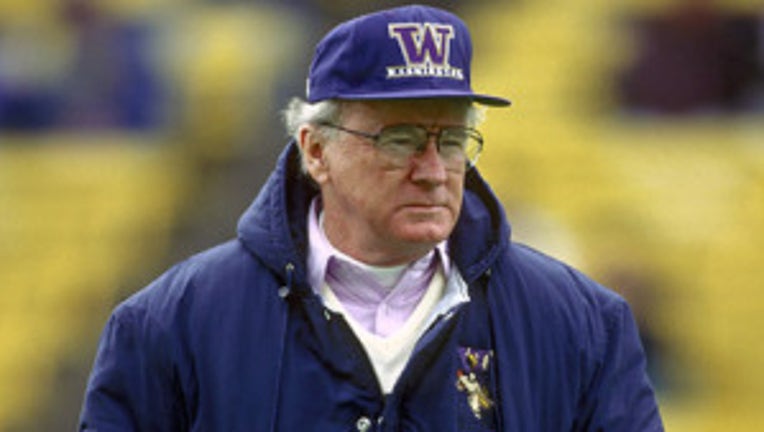 SEATTLE - Longtime University of Washington football coach Don James passed away Sunday morning, at home, comforted by his family.  James died from effects of pancreatic cancer, a press release from the UW reported.  Details on a public memorial service are to be announced.

To several generations of Washington football fans, James' name is the one most associated with the highest highs of the program. The "Dawgfather" served as the UW football team's head coach from 1975 through 1992.

During his 18 seasons at the helm, he led Washington to six conference titles and the 1991 national championship. James was named the AFCA National Coach of the Year in 1977, when he led the Huskies to the Rose Bowl for his first time. In 1991, he won four different national coach of the year awards. At the time of his retirement in 1993, his 10 bowl-game victories were fourth-most in college history, behind only Paul "Bear" Bryant, Joe Paterno and Bobby Bowden.

Born Dec. 31, 1932, in Massillon, Ohio, James graduated from Massillon Washington High in 1950. By then, his older brother Tommy was three years into a 10-year NFL career.

He played quarterback at the University of Miami (Florida), graduating in 1954 with a degree in education. Upon graduation, he won the Phillip Optner Trophy, honoring the senior player at Miami with the highest academic average.

James went on to earn a master's degree in education from the University of Kansas, where he served as a graduate assistant coach, and was also commissioned as a second lieutenant in the U.S. Army.

After stints as an assistant coach at Florida State, Michigan and Colorado, James was named head coach at Kent State in 1971, compiling a 25-19-1 record over his four seasons. He was named the Mid-American Conference Coach of the Year in 1972, when he led the Golden Flashes to a conference title and their first-ever bowl game appearance.

Prior to the 1975 season, he was hired as Washington's coach. In his third season, he led the Dawgs to an 8-4 record and a 27-20 win over Michigan in the Rose Bowl, the first of 15 bowl appearances his teams made at the UW.

Building his reputation as a master of organization and as a coach willing to change strategy and philosophy when warranted, James also won Pac-10 championships in 1980, 1981, 1990, 1991 and 1992. His 1991 team, which finished 12-0 and beat Michigan in the Rose Bowl, is regarded as the greatest team in Washington history. That team was named the national champion by USA Today/CNN, UPI, the Football Writers, Sports Illustrated and a number of computer rankings.

"My family and I are extremely saddened to hear of Coach James' passing," current UW coach Steve Sarkisian said. "His accomplishments as a football coach stand alone, but what made him truly special is the quality of man he was away from the game. The guidance and leadership he instilled into this program and community are still felt today, and will continue to be felt here for a long, long time."

During his UW tenure, 109 players coached by James were selected in the NFL Draft, including 10 in the first round.

James, who served on the Stadium Advisory Committee for the renovation of Husky Stadium, attended Washington's Aug. 31 game vs. Boise State, when the stadium was re-opened. He had served as an honorary captain for the coin toss in the final game prior to the renovation, Nov. 5, 2011, vs. Oregon.

James is survived by his wife, Carol, who he married in August of 1952. They had three children: Jeff, Jill and Jeni, and 10 grandchildren. During his many years in the Pacific Northwest, he shot a hole in one in golf, completed a marathon and summited Mount Rainier.