WASHINGTON - The number of Americans applying for unemployment benefits rose for the first time in five weeks even though the economy and job market have been recovering briskly from the coronavirus pandemic.

The Labor Department reported Thursday that jobless claims edged up to 353,000 from 349,000 a week earlier. The weekly count has fallen more or less steadily since topping 900,000 in early January as the rollout of COVID-19 vaccines has helped the economy — encouraging businesses to reopen or expand hours and luring consumers out of their homes to restaurants, bars and shops.

But a resurgence of cases linked to the highly contagious delta variant has clouded the economic outlook. And claims already remain high by historic standards: Before the pandemic tore through the economy in March 2020, the weekly pace amounted to around 220,000 a week.

Filings for unemployment benefits have traditionally been seen as a real-time measure of the job market’s health. But their reliability has deteriorated during the pandemic. In many states, the weekly figures have been inflated by fraud and by multiple filings from unemployed Americans as they navigate bureaucratic hurdles to try to obtain benefits. Those complications help explain why the pace of applications remains comparatively high. 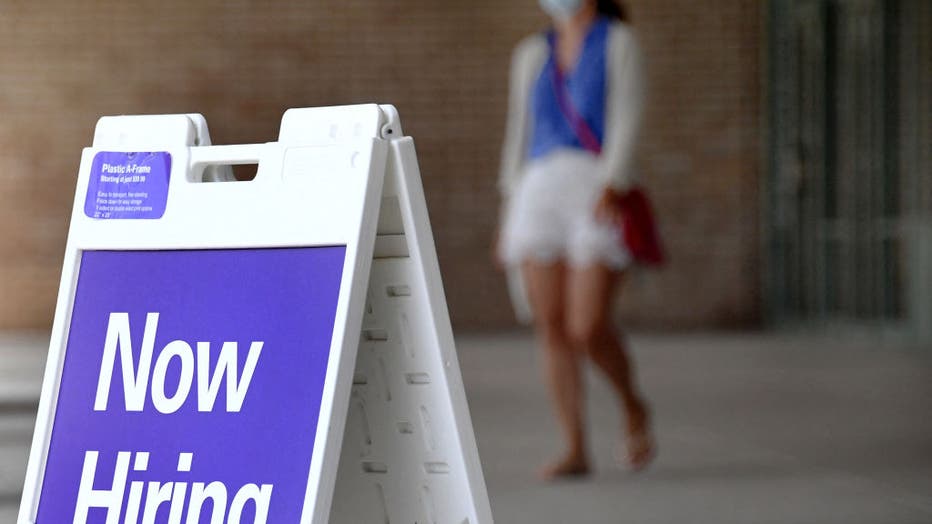 FILE - A pedestrian walks by a "Now Hiring" sign outside a store on Au. 16, 2021, in Arlington, Virginia. (Photo by OLIVIER DOULIERY/AFP via Getty Images)

The job market has been rebounding with vigor since the pandemic paralyzed economic activity last year and employers slashed more than 22 million jobs in March and April 2020. The United States has since recovered 16.7 million jobs. And employers have added a rising number of jobs for three straight months, including a robust 943,000 in July. They have been posting job openings — a record 10.1 million in June — faster than applicants are lining up to fill them.

Some employers blame heir labor shortages on supplemental unemployment benefits from the federal government — including $300 a week on top of regular state aid — for discouraging some of the jobless from seeking work. In response, many states have withdrawn from the federal programs, which expire nationwide next month anyway.

Economists point to other factors that have kept out of the job market — difficulty finding or affording child care, fear about becoming infected by the virus at work and the hope of some people to find better jobs than they had before the pandemic.

Whatever the causes, the economy remains 5.7 million jobs shy of what it had in February 2020.