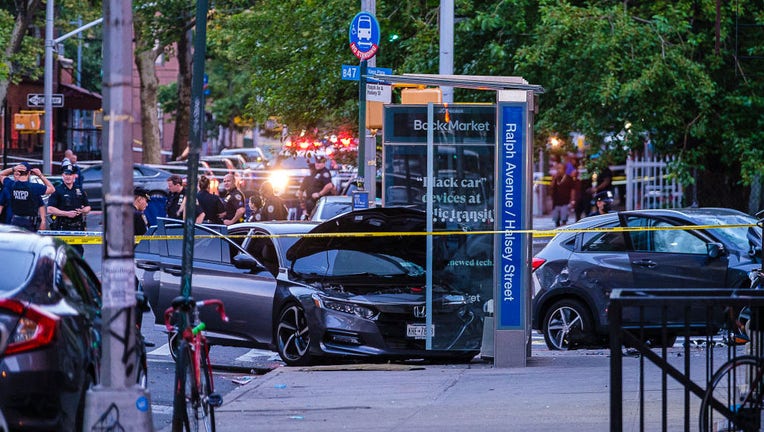 FILE - NYPD officers investigate a fatal crash where a bicyclist and pedestrians were struck when two cars raced and crashed on June 25, 2022. (Photo by Jeff Bachner/NY Daily News via Getty Images)

U.S. traffic deaths, once in decline, have continued to climb over the past couple of years and hit a two-decade high in early 2022.

In the first three months of the year, 9,560 people died in motor vehicle traffic crashes, a 7% increase from a year ago, according to estimates shared Wednesday by the National Highway Traffic Safety Administration.

It was the highest number of first-quarter traffic deaths since 2002.

Traffic deaths have risen ever since COVID-19 pandemic lockdowns eased in 2020 as people returned to work and started taking more road trips. People drove about 40 billion more miles in the first quarter than a year earlier, a 5.6% increase, the agency said. But the rate of traffic deaths per 100 million miles traveled also increased during the quarter from 1.25 deaths to 1.27, according to the agency.

Before 2020, the number of fatalities had fallen for three consecutive years.

The government has blamed the increase on speeding, impaired driving and other reckless behavior, and it has pledged to fund investments in speed enforcement and to build safer roads.

Officials at the scene said the crash was fatal, though few other details were released concerning victims. The school bus was empty of passengers.

"The overall numbers are still moving in the wrong direction," NHTSA Administrator Steven Cliff said in a prepared statement. "Now is the time for all states to double down on traffic safety."

The agency has started running ads urging people to slow down and not to drive while impaired. On Wednesday, it announced the annual" Drive Sober or Get Pulled Over Labor Day" enforcement campaign, which focuses on preventing impaired driving and improving safety on the roads with local police for the weeks around the end-of-summer holiday.

The NHTSA has also launched a public education campaign to address speeding, which is called "one of America’s most dangerous driving behaviors." The "Speeding Wrecks Lives" campaign aims to change general attitudes toward speeding and remind drivers of the deadly consequences.

Nearly 43,000 people were killed on U.S. roads last year, which was the highest number in 16 years.

Traffic deaths rose 10.5% last year over 2020, the largest percentage increase since NHTSA began its fatality data collection in 1975. The agency will release the final numbers for 2021 in the fall.

NHTSA's fatality estimates are usually close to the actual numbers.

Cliff, who was confirmed by the Senate to run NHTSA just three months ago, is leaving the agency next month to run the California Air Resources Board, which regulates pollution. Chief Counsel Ann Carlson will run the agency until a new administrator is nominated.