As the world waits for a COVID-19 vaccine to be approved and become widely available, the worsening pandemic is taking an increasingly dire toll on the United States as winter falls, with the country reporting alarming new statistics.

“We are at some of the highest case numbers, the highest that we’ve seen since the beginning of the outbreak,” Beth Blauer with the Johns Hopkins University’s Coronavirus Resource Center said in a Nov. 20 briefing.

Over the past 24 hours, the country reported more than 187,000 new cases and 2,015 virus deaths, according to data from Johns Hopkins University. The number of people in the hospital with COVID-19 also hit an all-time high at more than 80,000.

Cases in nearly every U.S. state are increasing, according to Johns Hopkins’ data. The overall U.S. death toll has reached about 253,000, by far the highest in the world. The total number of confirmed U.S. infections has topped 11.7 million. 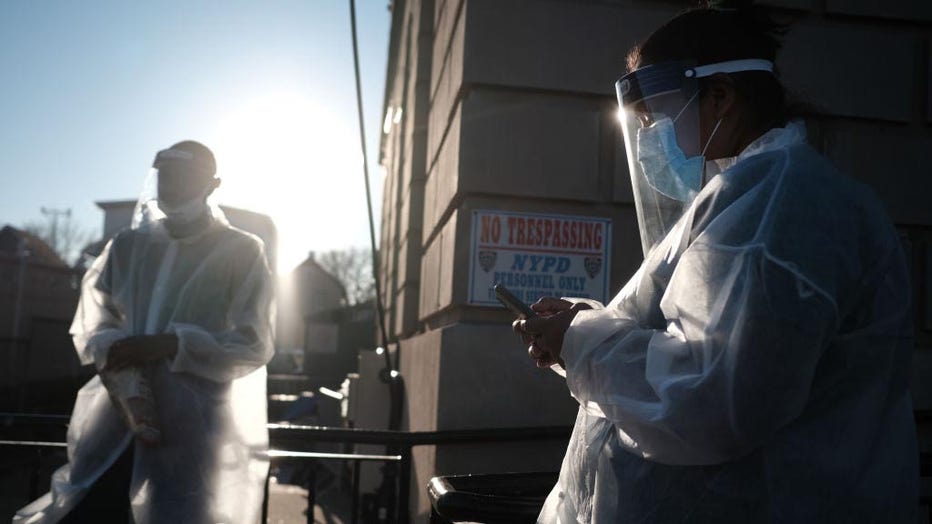 Workers at a COVID-19 testing location take a break in the Staten Island neighborhood of Tottenville on Nov. 20, 2020 in New York City. The Tottenville zip code shows an approximate 6.5% positivity rate, currently the highest in the five boroughs. (P

Compared to many other, more population-dense countries, the U.S. is still outpacing the world in the spread of the virus, Blauer added. “We are in a very critical moment as we continue to see the spread of this disease,” she said.

Blauer and her team take raw COVID-19 data and create visualizations to help policymakers and elected officials use data to inform decisions.

“This is a pandemic that is hitting very hard in rural America, and that is having a devastating effect and it’s really stretching our capacity from a health response,” she said.

Health experts have for months warned of a dark winter due to disregard for mask-wearing and other precautions, the onset of cold weather and crowded holiday gatherings. Many states and cities throughout the country have imposed mask mandates and other safety restrictions in recent days to help curb the ongoing spread of the virus.

RELATED: Coronavirus restrictions by state: What you need to know

COVID-19 deaths in the U.S. are now averaging over 1,300 COVID-19 per day, the highest level since late May, when the Northeast was emerging from the first wave of the crisis. The figure peaked at about 2,200 a day in late April, when New York City was the epicenter and bodies were being loaded onto refrigerated trucks by forklift.

Now, seven months later, other regions of the country are dealing with the tragic impact of the virus and its continuing spread.

The Texas border county of El Paso, where more than 300 people have died from COVID-19 since October, is advertising jobs for morgue workers capable of lifting bodies weighing 175 pounds or more. Officials are offering more than $27 an hour for work described as not only physically arduous but “emotionally taxing as well.”

The county had already begun paying jail inmates $2 an hour to help move corpses and has ordered at least 10 refrigerated trucks as morgues run out of room.

The White House Coronavirus Task Force held its first briefing this week since July. Both Dr. Anthony Fauci and Dr. Deborah Birx, who are members of the task force, urged Americans to “double down” on efforts to prevent the spread of COVID-19 and said cases are spreading “more rapidly” than ever.

Fauci, the nation’s top infectious disease expert, touted the safety of the vaccine development process, which is nearing the finish line, but said the country needs to continue wearing masks and doing other safety measures in the meantime.

Pfizer and its German partner BioNTech formally submitted their request Nov. 20 for emergency use authorization of a COVID-19 vaccine. Pfizer has said the vaccine appears 95% effective at preventing the disease.

It could take the FDA up to four weeks to approve the request, and potentially make the first, limited shots available as early as next month to health care workers and other high-risk groups.

It could take months before the vaccine becomes widely available.