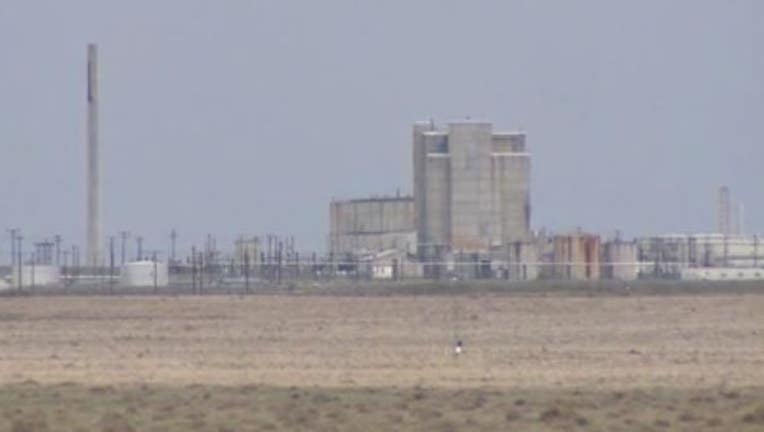 SPOKANE, Wash. - Costs to clean up a massive nuclear weapons complex in Washington state are usually expressed in the hundreds of billions of dollars and involve decades of work.

But one project on the Hanford Nuclear Reservation is progressing at a much lower price.

The federal government is moving forward with the "cocooning" of eight plutonium production reactors at Hanford that will place them in a state of long-term storage to allow radiation inside to dissipate over a period of decades, until they can be dismantled and buried.

"It’s relatively non-expensive," Mark French, a manager for the U.S. Department of Energy, said of cocooning. "The cost of trying to dismantle the reactor and demolish the reactor core would be extremely expensive and put workers at risk."

The federal government built nine nuclear reactors at Hanford to make plutonium for atomic bombs during World War II and the Cold War. The site along the Columbia River contains America’s largest quantity of radioactive waste.

The reactors are now shut down and sit like cement fortresses near the southeastern Washington city of Richland. Six have already been cocooned for long-term storage, and two more are headed in that direction. The ninth reactor was turned into a museum as part of the Manhattan Project National Historical Park.

While World War II ended in 1945 and the Cold War ended in 1989, the United States is still paying billions of dollars per year for the disposal of the nuclear waste produced by the atomic weapons that played a big role in ending those conflicts. The biggest expense is dealing with a massive volume of liquid wastes left over from the production of plutonium, a key ingredient in nuclear weapons.

While the liquid wastes stored in 177 underground tanks will take decades of work and hundreds of billions of dollars to clean, efforts to secure the nine plutonium reactors are much closer to completion.

The last two reactors, shut down in 1970 and 1971, are about to enter the cocooning stage, when they are covered with steel and cement to prevent radioactivity from escaping into the environment, French said.

The cocoons are expected to last about 75 years, by which time the radioactivity inside will have dramatically decreased and there presumably will be a plan for final disposition of the remaining parts, French said.

Every five years, workers enter the reactor building to make sure there are no leaks or rodent or bird infestations, he said.

Cleanup of Hanford, which has about 11,000 employees and is half the size of Rhode Island, started in the late 1980s, and now costs about $2.5 billion per year. The work has been slowed by technical issues, lack of funding, lawsuits from state regulators, worker exposure to radiation and turnover of contractors on the complex job.

But the handling of the old reactors is a bright spot.

They were constructed next to the Columbia River because of the abundance of hydropower and cooling water needed by the reactors during operation.

All have been cocooned except K-East and K-West. Work on cocooning the K-East reactor has already started and should be finished by 2023, French said. Work on the K-West reactor is scheduled for completion in 2026.

The cocoon plan for K-East and K-West is to basically construct steel buildings around them. Each building is 158 feet (48.2 meters) long, 151 feet (46 meters) wide and 123 feet (37.5 meters) tall, French said. The two steel buildings will cost less than $10 million each.

Future generations will decide the final disposition of the eight Hanford reactors, French said. They will likely be dismantled and buried in the central area of the Hanford site, away from the river.

"Robots may be deployed in the future" for that work, French said.

"Nobody is raising any concerns about cocooning," Carpenter said. "We’re all worried about the tank waste that needs immediate and urgent attention."

The bigger question is whether future generations will be willing to pay the massive costs of Hanford cleanup, he said.

Carpenter said the estimated cost to completely clean up just the tank wastes at the Hanford site is around $660 billion.

"This will cost more than anyone thought possible," Carpenter said of the tank wastes and other wastes that were dumped into the ground at Hanford. "It’s a hidden cost of the (nuclear) buildup."

By then, there might be bigger budget concerns such as dealing with the effects of climate change, Carpenter said.

The most intriguing of the old reactors is the B Reactor, the first one built during World War II. It will not be cocooned, and can be visited by tourists at the national historical park. B Reactor, which shut down in 1968, was cleaned up enough to allow some 10,000 tourists to visit each year and learn the history of Hanford. It has been designated a National Historic Landmark.

Plutonium from Hanford’s B Reactor was used in the testing of the world’s first atomic bomb in July 1945. Called the Trinity Test, the bomb was blown up in the New Mexico desert. Hanford plutonium was also used for the bomb that was dropped over Nagasaki, Japan, on Aug. 9, 1945.