Washington, D.C.-area voters discuss their thoughts following the 2020 Democratic National Convention and the most important issues for them in November.

As coronavirus cases continue to mount across the nation, strain on local governments to provide safe and sanitary polling locations in the face of the contagion has resulted in election officials working with political groups and the private sector to ensure that election sties stay open.

“A lot of localities are really worried about the number of poll workers that they’re going to have,” said Ellen Weintraub, who serves as commissioner on the Federal Election Commission. “We saw this in the primary where they had to shut down all sorts of polling stations and consolidate the polling stations because they just didn’t have enough poll workers.”

According to Weintraub, the majority of poll workers are traditionally retirees, and those workers serve as the backbone of the in-person voting system.

Because much of the elderly population is at much higher risk in the ongoing pandemic, younger people are the latest target to staff this year’s polling sites. 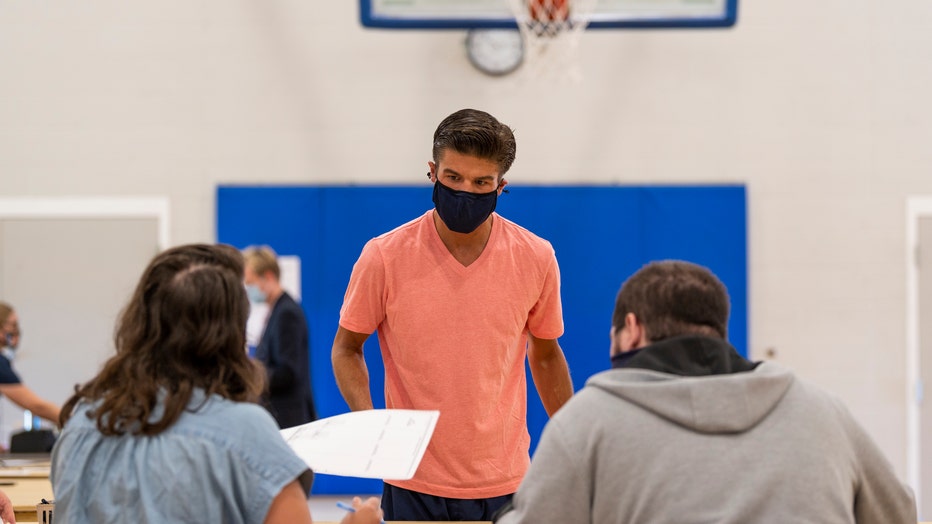 MINNEAPOLIS, MN - AUGUST 11: A voter receives their ballot at a polling place in the Pearl Park Recreation Center on August 11, 2020 in Minneapolis, Minnesota. Amongst other officials, the primary race for Minnesota's 5th congressional district is on

“Now, we’re really going to have to appeal to young, healthy people to the extent that if this is being broadcast, I ask anybody who is young and healthy and wants to do something for their democracy, to consider volunteering to be a poll worker. Because we really need that,” said Weintraub.

More than two-thirds of poll workers are over age 61, putting them at higher risk of serious complications from COVID-19. Scores of workers dropped out during this year’s primary season, taking with them decades of experience as the pandemic stifled efforts to train replacements.

With the need for a young, exciting work force to champion in-person voting this year, the U.S. Election Assistance Commission (EAC) announced that Sept. 1 is “National Poll Worker Recruitment Day.” The initiative is aimed at firing up young voters excited to participate in the democratic process.

“Working the polls on Election Day is a meaningful, rewarding way to strengthen our democracy – right in your community,” said EAC Vice Chair Don Palmer. “Across the country, we are seeing unprecedented levels of civic engagement in helping fellow citizens, but not enough people know about poll working as a volunteer opportunity – or being paid. National Poll Worker Recruitment Day aims to help fill that awareness gap and encourage more people to become poll workers and help ensure a safe and secure election for our democracy in November.”

Millions of Americans will likely seek to send in their vote by mail out of fear of venturing to a polling location that could attract large crowds, creating optimal conditions for a possible coronavirus outbreak, but various voting rights groups, along with high-profile celebrities, are working to make sure in-person voting this year is efficient and safe.

Along with other Black athletes and entertainers, basketball legend LeBron James formed a voting rights group this past spring to push for mega-voting sites to accommodate in-person balloting amid the pandemic — mega-voting sites that will definitely need the staff to see James’ vision through.

Called “More Than A Vote,” James’ nonprofit organization is a dedicated coalition of Black athletes and artists working together to educate, energize and protect young communities of color by fighting systemic voter suppression.

The group shared its plans with The Associated Press in July after the Detroit Pistons became the second NBA franchise to announce plans to use its arena for voting later this year. In Georgia, Fulton County elections officials this week approved the Atlanta Hawks’ proposal to use State Farm Arena as a polling site. Plans call for the arena to serve as a countywide early voting site ahead of Election Day.

James’ organization is also working with Los Angeles Dodgers to transform the franchise’s Dodger Stadium into a voter center this November.

“We are all in this together,” James said in a statement. “This is exactly why we created More Than a Vote. A lot of us now working together and here for every team who wants to follow the Dodgers’ lead and turn their stadium into a safer place for voting.”

The National Vote at Home Institute and Silver Linings Group, two voting rights groups, have formed what they are calling the “Election Super Center Project.” It’s a nonpartisan initiative which has partnered with a large group of professional sports franchises to offer up their iconic venues to voters while promising to reduce lines and wait-times, while adhering to CDC guidelines aimed at limiting the spread of COVID-19 during socially distanced voting.

“Having additional venues available that are large enough to ensure ample social distancing with extensive health and safety protocols in place is important during this unprecedented time,” said Doc Rivers, head coach of the Los Angeles Clippers.