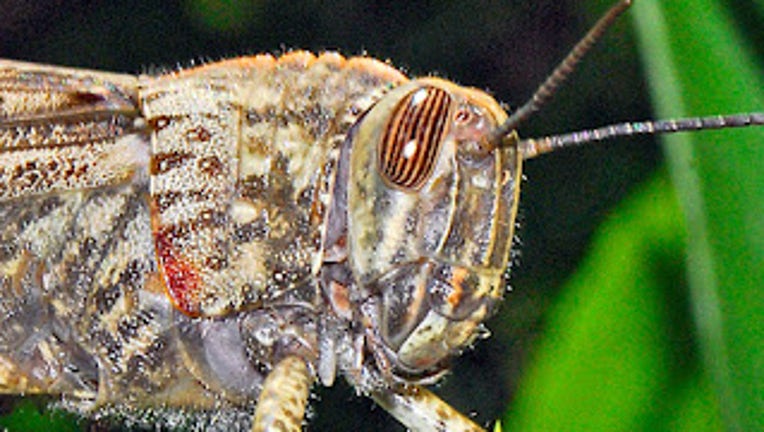 EVERETT, Wash. - State officials are asking people who live near Everett to be on the lookout for any unusually large grasshoppers with striped eyes.

Last week, the Washington State Department of Agriculture said an Everett resident reported an Egyptian grasshopper to state entomologists earlier this year, and the USDA recently confirmed it was the first detection of the insect in Washington state.

The grasshoppers feed on plant leaves, officials said. The adult insects are usually olive, gray or brown in color and are likely to be seen at the end of summer while younger grasshoppers are green and may blend in with vegetation. They have black stripes on their eyes, which sets them apart from other grasshoppers.

Male grasshoppers can grow to more than two inches long and females can be almost three inches long.

Officials with the department will be conducting a visual survey in the area but they are also asking the public to be on the lookout for the pest.

"An overwintering grasshopper could easily hitchhike, so this is another case where we are asking the public to help us figure out if this is just a single specimen," said Sven Spichiger, WSDA managing entomologist.

Washington state scientists are asking the public to be on the lookout and to report sightings after the world's largest known moth was recently found in Bellevue.

The Egyptian grasshoppers are considered to be a minor concern in their native habitat but could affect crops, orchards and vineyards.

Any resident near Everett who believes they may have seen the pest should send a picture to pestprogram@agr.wa.gov and include the location of where it was spotted. And if you believe you have seen one outside of the state, you are asked to take a picture of it, add the location and report it to your State Plant Regulatory Official or State Plant Health Director.