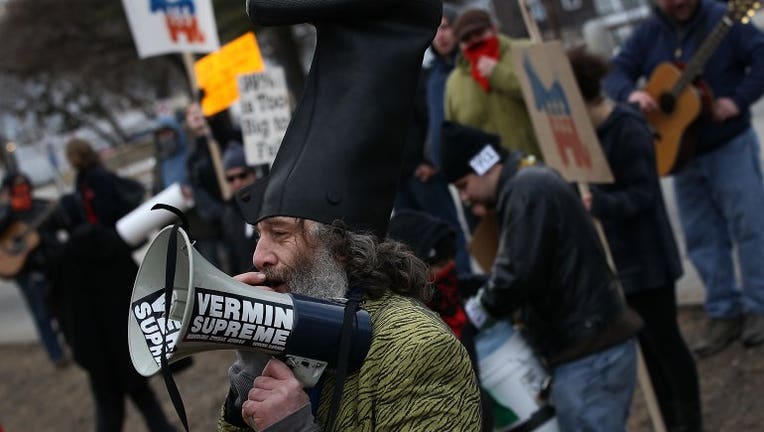 PAWTUCKET, R.I. (AP) — Candidates for political office typically want to show voters who they are and where they stand. But if they don't belong to a traditional political party, demonstrating their ideology and political principles on the ballot can be a challenge.

A mayoral candidate in Pawtucket, Rhode Island will have the phrase "Sick of Scandals" next to his name on the ballot this fall. Rhode Island is one of several states that give unaffiliated candidates some space on the ballot to list a political organization or philosophy. In other states, candidates have gone as far as legally changing their names to express their views.

The state of Washington gives a lot of leeway to candidates in how they define themselves, which is how a candidate was once able to run on the Salmon Yoga Party.

THE RENT IS TOO DAMN HIGH

New York's Rent is Too Damn High Party ran into trouble because of the state's 15-letter limit on party labels. After state officials dropped the word 'damn,' which the party's founder thought was needed for emphasis, the party restored its full name in 2010 by using "2'' instead of "too."

A candidate for Kentucky's state treasurer legally changed his name to "Robert Mead C.P.A." so it would appear on the ballot that way in 1987. He won the election. Most candidates with unusual names aren't as successful.

Chief Wana Dubie lost his bid to be a U.S. senator from Missouri. Perennial presidential candidate Vermin Supreme, who wears a boot on his head and has advocated for free ponies, came in fourth in this year's New Hampshire's Democratic primary. A perennial anti-abortion candidate in Idaho has legally changed his name to "Pro-Life."

After changing his middle name, Byron (Low Tax) Looper ran for the Tennessee Legislature in 1998 but was convicted of murder in the death of his opponent during the campaign. Looper died in prison in 2013.

In Louisiana and West Virginia, colorful and mostly apolitical nicknames are the rage, with people listed as "Boogie," ''Bones," ''Chicken Commander" and "Biscuit." Louisiana's Donald "Crawdaddy" Crawford is running for U.S. Senate this fall.

Others trying to use nicknames for political advantage have been denied.

A candidate for the North Carolina Supreme Court tried to use the nickname "Madame Justice" even though she had been neither a judge nor a justice.

'NUN' OF THE ABOVE

After activist and drag performer Sister Boom Boom, who dressed as a nun and listed his occupation as "nun of the above," came close to winning a seat on the San Francisco Board of Supervisors in 1982, the city changed the rules to block candidates from using assumed names. It wouldn't be the last time someone tried to get "none of the above" on a ballot.

A Tennessee court in 2006 denied a candidate calling himself David "None of the Above" Gatchell from using the phrase as his middle name on the ballot.