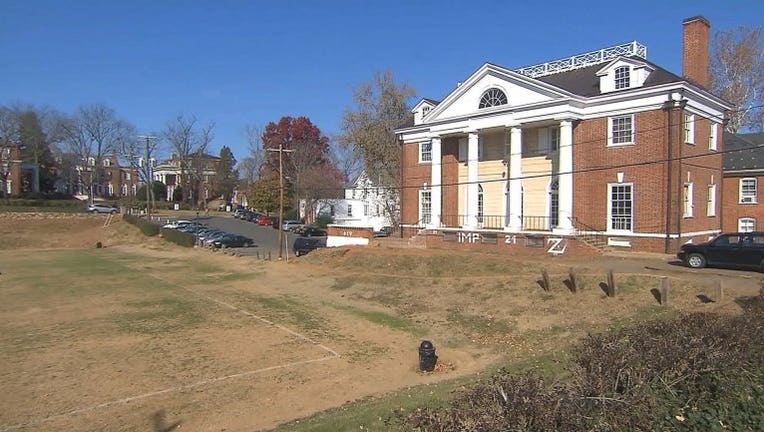 (CNN) -- "The status quo is no longer acceptable."

That's the message the University of Virginia is trying to send its students and others after a scathing Rolling Stone story detailed allegations of a gang rape at a fraternity party, and the school's supposed indifference toward students who are victims of sexual assault.

The horrific attack reportedly happened to a woman known only as Jackie, at the start of her freshman year in 2012. She told the magazine she was raped by seven men at Phi Kappa Psi, while two more gave encouragement.

The school stands accused of bungling its response to the assault, and sweeping other assault allegations under the rug.

"To Jackie and her parents, I say I am sorry," Rector George Keith Martin said at an emergency meeting of UVA's governing board this week. "To the survivors of sexual assault and their families, I am also sorry."

He added: "This type of conduct will not be tolerated at the University of Virginia. The status quo is no longer acceptable."

The board unanimously adopted a resolution affirming a zero-tolerance approach toward rape and sexual assault cases.

What exactly that means remains to be seen. The actual specifics of the new policy will be worked out later, university officials said. They are scrambling.

UVA suspended all fraternities until after the winter break in the wake of the report, and President Teresa Sullivan has called on the Charlottesville Police Department to investigate Jackie's allegations and pleaded for witnesses to come forward with information.

A few weeks before the November 19 article hit the newsstands, student-run WUVA interviewed the associate dean of students, Nicole Eramo, who guides women through their options when they report they've been assaulted.

In the interview, Eramo admitted that no student had been expelled for committing sexual assault, even when there was an admission, and even though offenses such as academic cheating regularly lead to expulsion.

"I feel if a person is willing to come forward in that setting and admit they violated the policy when there is absolutely no advantage to do so, then I feel that deserves some consideration, that they are willing to say, 'I have done something wrong and I am willing to take my licks and deal with it,'" Eramo told reporter Catherine Valentine, explaining why no one had been expelled.

Eramo said there had been 38 reports of sexual assault last year.

"I do feel like that person admitting in that context it shows a recognition of what they have done is wrong, and a willingness to improve," Eramo said, when pressed on the subject.

"I think we are trying to balance the rights of the individual who is being accused as well as the rights of the complainant and sometimes that is very difficult," she said. "I think you would be surprised to see the number of survivors who I've worked with who don't even want to file a complaint, because they don't want to get the accused person in trouble."

Although Eramo's interview struck many as tone deaf, particularly given the Rolling Stone story, Jackie released an open letter in support of the associated dean to the student newspaper, The Cavalier Daily. Jackie and other victims of assault at the school said Eramo helped them tremendously as they dealt with what happened to them.

"How can we not do the same for her in her darkest moment?" asked the letter from her supporters.

"Dean Eramo has truly saved my life. If it were not for her, I do not know if I could be alive today," Jackie wrote.

Another victim who spoke to CNN, Lyra Bartell, said that Eramo has "the hardest job at UVA" and said the problems highlighted by Rolling Stone are more about the policy than about a person.

Those policies were at the heart of the discussion at the special board meeting, where officials pledged to change cultural conditions and to improve support for survivors.

The university also announced that the state attorney general has asked the law firm O'Melveny & Myers to do an investigation of how the school responds to reports of sexual violence, especially in cases where alleged victims choose not to make a formal complaint.

"I want to make it perfectly clear to you, and to the watching world that nothing is more important to me than the safety of our students," President Sullivan said at the meeting. "Not our reputation, not our success, and not our history or tradition."