SEATTLE -- As we talk about a new tax to help the homeless, many have asked why the many millions of dollars Seattle has already spent, isn't making a difference?

Just take a look at the numbers. In 2017 alone, according to research by the Seattle Times, Seattle and King County spent almost $200 million on homelessness, when you combine all government and private philanthropic sources.

Unfortunately, the number of people without a home is not dropping. More than 11,000 people in King County were considered homeless in 2017. When the results of a new count come out later this month, those numbers aren't expected to go down. 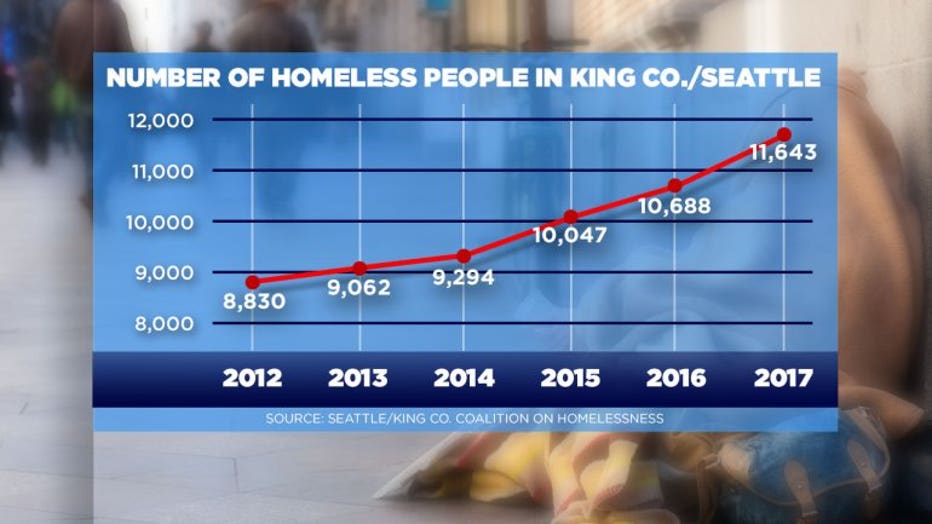 Q13 Fox took these questions to the United Way of King County, a key player in all of this.

“We can do better for people who need it and that`s why we have a sense of urgency, “ said Jon Fine, CEO of the United Way of King County. In his 17 years as CEO, Fine has seen the region’s homeless problem grow.

According to numbers from the Seattle/King County Coalition on Homelessness, the number of those homeless has grown 24 percent from 2012 to 2017.

“We can see it visually with the tents on the street and we can see it in the numbers that we`re counting them up,” said Fine.

Fine and Peter Orser, the United Way`s chairman of the Homeless Impact Counsel, have also had a front-row seat to the proposed solutions, the good and the bad.

“We are getting better in some place and we`re not getting enough better as a system,” said Fine.

This is why on Sunday May 4th, Orser and Fine did something they've never done together: they co-wrote and published an editorial in the Seattle times, offering four solutions. But when Q13 Fox sat down with Fine and Orser they focused on one main priority: a joint city-county government entity with the authority to address homelessness.

“We`re concerned that a lot of good intentioned organizations are asking for money in an uncoordinated way,” said Fine. “We would make sure that whatever amount of money would be spent in a coordinated way.”

Fine says the head tax did not inspire the op-ed, the piece was in progress long before the debate. Their message is about the greater problem.

“We`re in a war,” said Orser. “The mayor and the executive have declared an emergency. When you declare an emergency that`s not just day to day, that is an all-out effort that needs some tactical planning to execute at all levels.” 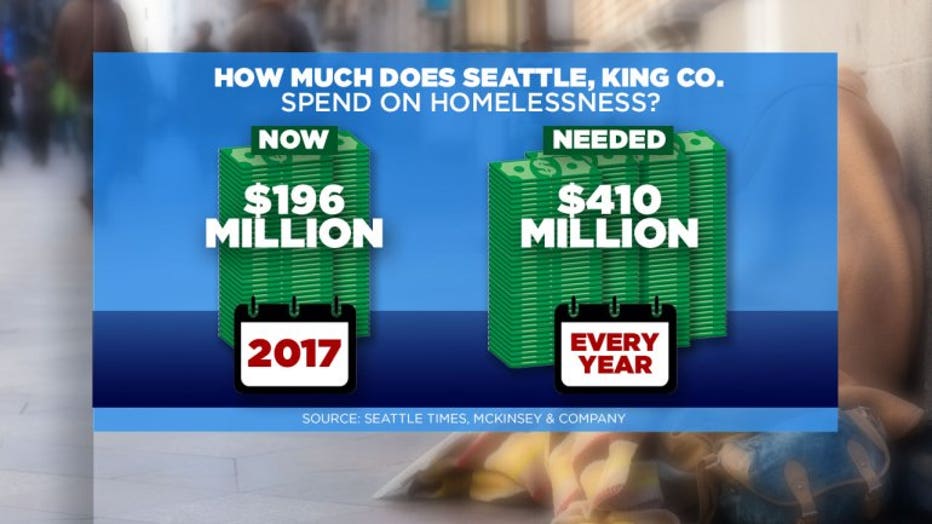 Both agree - it will take more money. An independent analysis of the homeless crisis by the consulting firm McKinsey & Company, released last week suggests the region double their financial commitment and spend $410 million annually to really make an impact. But Fine and Orser say it's not quite that simple.

“It’s hard to say precisely what that number should be,” said Fine.

“We need more supply and we need more service to support,” said Orser. “We can get some of the more out of efficiency effectiveness and leadership and courage to act but at the end of the day, because of the scope of the problem, there's the likelihood for the need to be more.”

They agree more money is needed but so is a better plan about how to spend it.

And, they say, it'll take the courage to execute it for the thousands with no place to go but the streets.

“I think courage is a good word because I'm confident that we're all being courageous about a common goal which is really to help those that don't have what all the rest of us do,” said Orser.