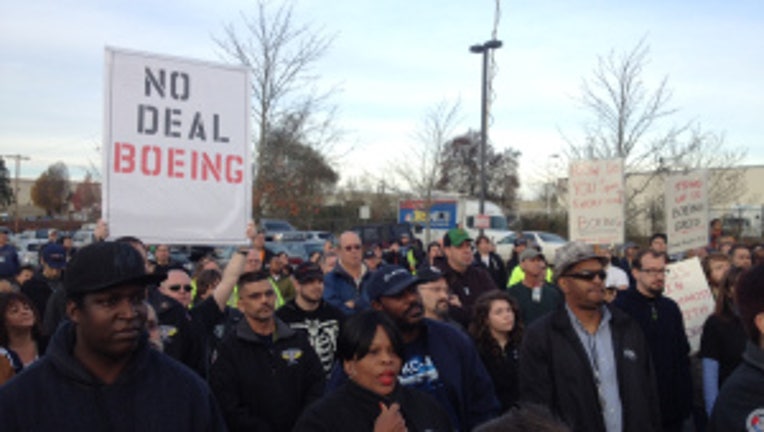 EVERETT - Local 751 district Machinists are divided and in turmoil after their union leaders rejected the Boeing company's revised contract offer.  One group, including the local leadership, refuses to give up gains from past negotiations, by making concessions on pay and benefits, the Seattle Times reported.  The other group, including national leadership, is fearful of massive job losses within the decade, and they're willing to Boeing's eight-year contract extension to ensure future work.

“People are really looking at this as a make-or-break situation,” said Adam Subitch, 27, a painter on the 777 line in Everett told the Times. “This is our livelihood we are talking about. ... People are scared.”  Subitch has worked for Boeing for seven years.

At the other end of the debate, long time employee Wilson Ferguson, a 26-year veteran employee, led a rally a month ago calling for a no vote on Boeing's first 777X contract offer.

Ferguson dismisses the revised offer and opposes even voting on it.

“The primary issue was the pension and that is unchanged from the first proposal,” he said. “Our membership has spoken.”

Ferguson said he’ll balk at giving up the traditional pension, even if it means that 777X is lost and Everett’s economic future evaporates.

“I believe Boeing when they say they are going elsewhere ... I don’t like it, but it’s ludicrous to put that burden on the hourly workforce,” said Ferguson. “It’s just a bridge too far to ask us to give up our defined benefit-pension plan.” Ferguson told the Times.