Russia appears to be stepping up their attacks against Ukraine, with even more missile strikes and bombings happening overnight in multiple cities across the country. Meanwhile, talks between the two countries are continuing as officials seek a safe way to evacuate people from the areas under combat.

A Ukrainian actor, who was fighting for his country on the frontline amid Russia’s invasion, has died while carrying out his orders, the Odesa International Film Festival said on Sunday.

Pasha Lee, who served on Ukraine’s territorial defense unit after he put his acting and TV hosting duties to the side when the war began, was killed in action during a Russian shelling in Irpin, a Facebook post shared to the film festival’s profile said. He was 33.

"He is an actor, TV presenter, my colleague and a good acquaintance," Kasilova wrote about Lee. "Never forgive!"

Lee was also a well-known singer and composer, the post said. 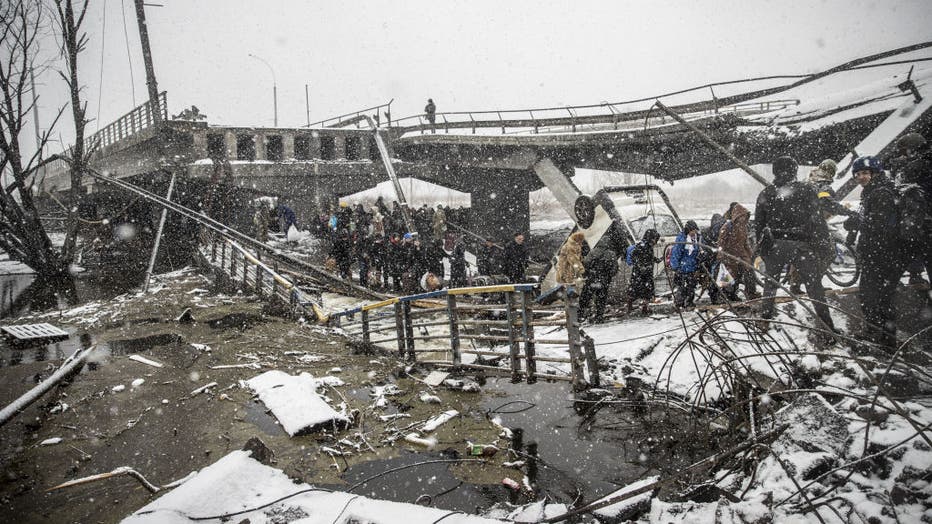 FILE IMAGE - Civilians continue to flee from Irpin due to ongoing Russian attacks as snow falls in Irpin, Ukraine, on March 8, 2022. (Photo by Emin Sansar/Anadolu Agency via Getty Images)

He had starred in the theater space and also in a number of commercials and films such as Lyubomyr Levytsky’s "Shadows of Unforgotten Ancestors" and Oleksey Shaparev’s "The Fight Rules," as well as Valentyn Vasyanovych’s "Zvychayna Sprava" and "‎Meeting of Classmates," among other cinema projects.

The Office of the United Nations High Commissioner for Human Rights has confirmed 406 civilians killed in Ukraine since Russian President Vladimir Putin's invasion began on Feb. 24. And 801 more civilians were injured as of midnight Sunday, the office said, noting that fighting has stymied accurate reporting, and the numbers are actually higher.