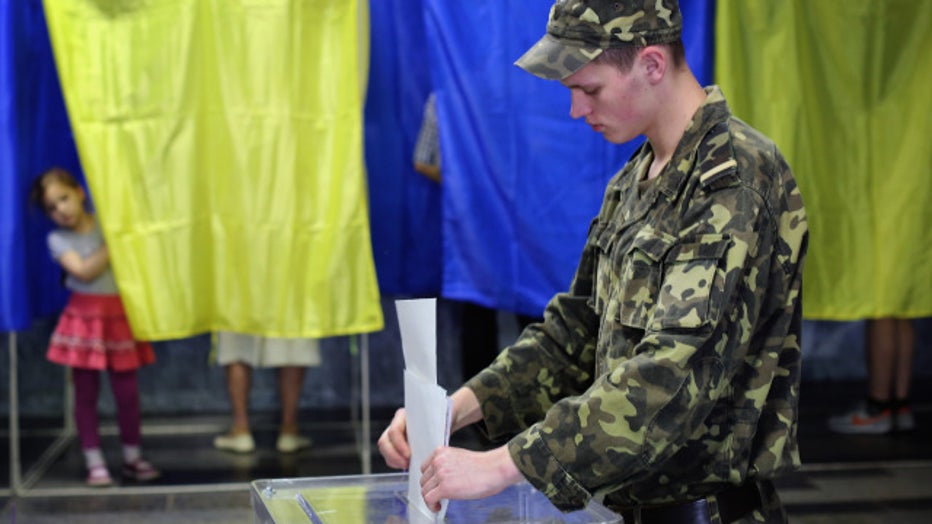 A man in military uniform casts his vote in a polling booth on May 25, 2014 in Kiev, Ukraine. The Ukrainian Presidential election is taking place today. (Photo by Dan Kitwood/Getty Images)

His closest challenger, former Ukrainian prime minister and leader of the Batkivshchyna party Yulia Tymoshenko, conceded the election after exit polls showed her with 13% of the vote.

Poroshenko, a candy tycoon known as the "Chocolate King," is also a seasoned politician.

The election took place Sunday despite a recent wave of deadly violence in the East and threats by pro-Russia separatists to prevent citizens from casting their ballots.

The unrest has centered in the Donetsk and Luhansk regions, where separatists have claimed independence following a disputed referendum earlier this month -- and many there did not get to cast ballots.

As of 3 p.m. (8 a.m. ET), some 528 polling sites out of 2,430 were open in the Donetsk region, the regional administration said. Local officials said there was 11.8% turnout at these polling stations.

Outside the country's restive East, voting was progressing more normally.

In the city of Donetsk, the regional capital where pro-Russia militias are concentrated, there are no open polling stations, local officials said earlier.

A CNN team driving through the city Sunday morning was not able to see a single polling station in operation. However, there were signs some voters were trying to go to polling stations in areas west and south of the city.

A large separatist rally was held in a central Donetsk city square around lunchtime. The protesters, who chanted pro-Russia slogans as they were addressed by separatist leaders, were joined by a substantial number of militants on trucks, some firing guns into the air.

On the back of some of the trucks were armed men who appeared to be Chechen. Two told a CNN team they were from the Chechen capital, Grozny, and one indicated that he was formerly a policemen in Chechnya and was in Donetsk to serve the Russian Federation.

The men, who as Chechens are Russian citizens, said they were there as "volunteers." But if their accounts were true, their presence in Donetsk would appear to indicate some kind of acquiescence by the Russian government at the least.

Increasing violence in the East has led the authorities in Kiev to accuse Russia, which they say is backing the armed separatists, of seeking to disrupt the vote. Russia denies having direct influence over the militants, and Russian President Vladimir Putin has said he will respect the Ukrainians' choice.

Residents of Ukraine's southeastern city of Mariupol saw new billboards on the streets Sunday urging them not to cast their ballots. The billboards were not at those locations the night before, residents said.

Also in Mariupol, people talked on social media about being asked by local Russia supporters to boycott the election. The city is one of several where deadly clashes have erupted in recent weeks.

The self-declared mayor of rebel stronghold Slovyansk, Vyacheslav Ponomaryov, has said that anyone who tries to vote there will be arrested.

An Italian journalist was killed Saturday near the flashpoint town, the Italian Foreign Ministry announced Sunday. The man, named as Andrea Rocchelli, was killed along with a Russian citizen, the ministry said. Reports suggested there had been mortar fire in the Slovyansk area.

Voters are choosing a successor to ousted pro-Moscow President Viktor Yanukovych in a country torn apart by Russia's takeover of Ukraine's Crimea peninsula and bloody conflict with pro-Russia factions.

Besides the presidential race, candidates are also running in municipal elections in some cities.

Ukraine's acting President Oleksandr Turchynov said he would cast his ballot in the capital, Kiev, on Sunday morning.

The Organization for Security and Co-operation in Europe has deployed 900 observers for the election -- the largest such mission in its history.

Amid the escalating tensions, claim and counterclaim have swirled.

Interior Minister Arsen Avakov's spokeswoman, Natalia Stativko, told CNN that a claim on Avakov's website -- that the Electoral Commission's electronic vote counting system had been destroyed -- was fake. She said the website had been hacked.

The Prosecutor General's Office said Saturday it was investigating 83 cases of alleged interference in the election process in the Luhansk and Donetsk regions.

On Sunday, an adviser to the official Donetsk governor, Sergey Taruta, said a group of 40 armed men encircled and entered the Hotel Victoria, where the governor's office is temporary located. The men were dressed alike and had automatic weapons, said the adviser, Vasyl Azbuzov.

They were looking for the governor, who was voting in Mariupol at that time, but left after taking a list of the hotel's guests.

Yatsenyuk: You can't intimidate us

Whoever wins the presidency will face the challenge of reuniting a country that is deeply divided and in dire economic straits.

Prime Minister Arseniy Yatsenyuk on Saturday urged all Ukrainians to go to the polls, saying they would "prove to the whole world, and first of all to ourselves, that it is not possible to intimidate us, that we are going to decide ourselves how to rebuild our home and how to work in it."

Voters will be choosing a president to lead a country "for whose freedom, prosperity, European future, the Ukrainians are paying the highest price -- the price of their own lives," he said.

Despite the troubles in eastern Ukraine, he said, the vote would represent the "free and unobstructed choice" of the whole nation.

"And I would like to assure those our compatriots in Donetsk and Luhansk regions, who will be prevented from coming to the polling stations by the war waged against Ukraine: The criminals don't have much time left to terrorize your land," he added.

According to protesters speaking Saturday outside the headquarters of the self-declared "Donetsk People's Republic," as well as the body's Twitter account, Donetsk and Luhansk have united to form a new separatist republic called "Novorossiya."

The government in Kiev, which launched an "anti-terrorist operation" against the separatists, has so far been unable to dislodge them from the towns and cities they hold.

Putin on Friday told an economic forum in St. Petersburg that he would respect the will of Ukraine's voters in Sunday's election.

But he reiterated Russia's assertion that according to Ukraine's Constitution, Yanukovych -- who was ousted in February following months of street protests -- remains the nation's legitimate president.

Putin also questioned whether the election should be held now, given the violence in eastern Ukraine.

Russian Deputy Foreign Minister Aleksey Meshkov said Friday that Russia would decide whether or not to recognize the Ukraine vote only after it takes place, according to state media.


CNN's Nick Paton Walsh reported from Donetsk and Radina Gigova from Atlanta, while Laura Smith-Spark wrote and reported from London. Journalists Lena Kashkarova and Victoria Butenko, as well as CNN's Hada Messia, contributed to this report.