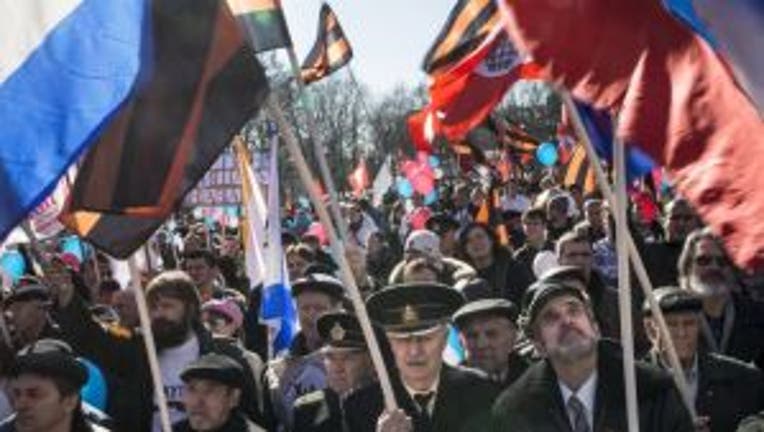 Kiev, Ukraine (CNN) -- Tensions remained high in Ukraine Saturday on the eve of a vote on secession in its southern Crimea region.

The vote looks set to go ahead Sunday despite high-stakes diplomatic efforts by the United States and the European Union.

The referendum will present Crimean residents with the choice of whether to secede from Ukraine and join Russia or effectively become independent.

Ukraine's acting Foreign Minister Andrii Deshchytsia repeated Saturday the interim government's position that the referendum is illegitimate and will not be recognized by Kiev or the international community.

The government is prepared to discuss greater autonomy and economic development for Crimea, he said, but around a table and "not talking to the guns which are on the streets of the Crimean cities."

Ukraine is engaged in a "diplomatic war" with Russia, he said, but is looking for a peaceful resolution to the crisis in Crimea. It will not respond to Russian "provocations," he said.

Russia -- which the West and Ukraine insist has the majority ethnic Russian Crimean peninsula under its effective military control -- has come under concerted international pressure to halt its activities there and talk to the interim government in Kiev.

But so far it has refused to budge.

Moscow has repeatedly denied direct involvement in Crimea, saying that the well-armed men in uniforms without identifying insignia are not Russian troops.

Russia on Saturday vetoed a U.S. draft resolution declaring the Crimea referendum invalid at a session of the U.N. Security Council in New York.

Thirteen of the 15 Security Council members backed the resolution, while China abstained from the vote.

Russia had been widely expected to wield its veto power as a permanent member of the Security Council.

Addressing the chamber, Russian Ambassador to the United Nations Vitaly Churkin argued that Crimean citizens had a right to self-determination.

But the U.S. Ambassador to the United Nations, Samantha Power, had a scathing response, describing Russia as "isolated, alone and wrong" in blocking a resolution which "had peace at its heart."

The French envoy to the United Nations, Gerard Araud, said he had watched Russia's actions with "incredulity."

To accept Russian annexation of Crimea would be against all U.N. principles and would turn the body into a farce, he said. "It would mean the sword is used to settle disputes."

Britain's U.N. Ambassador Mark Lyall Grant said, "The resounding message from today's vote is that Russia stands isolated in this council, and in the international community.

"Russia alone backs this referendum. Russia alone is prepared to violate international law, disregard the U.N. charter, and tear up its bilateral treaties. This message will be heard well beyond the walls of this chamber."

He appealed to Russia to hear the voice of the international community and engage with the Ukrainian authorities.

"Of course Russia has a veto, but if Russia will not support this resolution, it means Russia is not in favor of settling this crisis in a peaceful manner," he said.

Deshchytsia said efforts to establish a "contact group" with Russia -- a step urged by Western powers -- have so far failed because Moscow will not agree to Ukraine's full representation within the proposed body.

Asked by CNN whether the government has any plans to withdraw Ukrainian military forces from Crimea, Deshchytsia said "all plans are on the table" but that withdrawal is not being discussed.

Ukraine's parliament passed a resolution Saturday to take away the powers of the Crimean parliament with immediate effect, according to the Kiev parliament's website. Of 296 total lawmakers present, a majority 278 voted in favor of the resolution.

The vote is largely symbolic and is not expected to impact decision making in Crimea, or the referendum slated for Sunday.

Crimea's pro-Russian government was installed at the end of last month after the parliament building was taken over by armed men who raised the Russian flag.

Thousands of pro-Russian supporters joined a noisy but peaceful rally supporting the Crimean referendum in Ukraine's eastern city of Donetsk on Saturday afternoon.

Some protesters called for a referendum on independence, while others demanded separation from Ukraine and a union with Russia. The chant "Russia, Russia" rang around Lenin Square. There was no sign of pro-Ukraine demonstrators in the square, and riot police stood to one side.

The demonstrators then marched through the city, calling for the ousting of Donetsk regional governor Sergeii Taruta, who was appointed by the new government in Kiev. They also chanted "Shame on you" outside the office of Ukraine's security agency, the SBU, which is loyal to Kiev.

Some of the protesters handed out leaflets urging people to return to the square Sunday for further protests.

Igor Demin, spokesman for the Donetsk region police department, told CNN beforehand that more than 1,000 police would be on duty for the rally in a bid to prevent violence.

A man was fatally stabbed and at least 10 others were injured in clashes in Donetsk on Thursday. Russia blamed "right-wing radical groups" for the violence, while Ukrainian authorities suggested it was linked to Russian citizens who want to escalate tensions in Ukraine.

A court in the city rejected an application by Donetsk City Council to ban all weekend demonstrations in the city, Maksim Rovinsky, press secretary for the city administration, told CNN. The court said there was no evidence of danger to the public.

Many people living in Ukraine's eastern region, along the Ukraine-Russia border, identify more with Russia than with Ukraine.

As demonstrators marched in Donetsk on Saturday, protesters also took to the streets in the Russian capital, Moscow.

State news agency Itar-Tass, citing Moscow police, said some 15,000 turned out for a rally in support of the referendum in Crimea, while about 3,000 marched in protest against attempts to reunite Crimea with Russia.

The Black Sea peninsula was part of Russia until Soviet leader Nikita Khrushchev gave it to Ukraine in 1954. Ukraine was then part of the Soviet Union.

Tensions flared into violence late Friday night in the city of Kharkiv, north of Donetsk, and even closer to the Russian border.

Police have arrested 38 people in relation to the violence and confiscated a number of firearms, rounds of ammunition and petrol bombs, it said.

Despite U.S. warnings of "costs" for Russia if the vote goes ahead, Moscow has refused to budge on the crisis.

Lengthy talks between U.S. Secretary of State John Kerry and his Russian counterpart Sergey Lavrov in London on Friday resulted in little more than an acknowledgment of the gap between them.

As Lavrov said, "We don't have a common vision."

Meanwhile, thousands of Russian troops continued a large-scale military drill Friday near the Ukraine border. On the same day, armored trucks toting long-range guns and other military equipment rumbled through northern Crimea. At least one of the vehicles seen by CNN had Russian license plates.

Already, eight Ukrainian military units in Crimea have been taken over, 22 others are blocked, and 49 of 56 border patrol stations are in similar straits, Ukraine's foreign ministry said.

Kiev's new Western-leaning government, which came to power following the ouster of President Viktor Yanukovych, has insisted that Ukraine's territorial integrity, including Crimea, must be respected.

Moscow has insisted it has the right to protect ethnic Russians in Ukraine, who it claims are threatened by radical nationalists and "fascists."

Estonia's defense minister, Urmas Reinsalu, said Friday that Ukraine is on the verge of a full-scale military conflict unless Russian President Vladimir Putin's hand is forced.

"It is clear that we are at a crossroads," U.N. Secretary-General Ban Ki-moon said. "If positions continue to harden and rhetoric continues to sharpen, there is great risk of a dangerous downward spiral."

Russia so far has refused to engage in direct talks with Ukraine's new leaders, although Lavrov said some communication continues with the interim government in Kiev.

Moscow has also denied any direct involvement in Crimea, saying what's happening in the Black Sea peninsula is an internal matter.

Russia has a major naval base in the Crimean port city of Sevastopol, and thousands of its troops are stationed there.

European nations and the United States have announced some targeted punishments against Russia in addition to offers of billions in aid to Ukraine's fledgling government.

Russia has seen steep declines in its stock market and the value of the ruble in recent days. The State Department has cautioned Americans about traveling to Russia given "the possibility of violence or anti-U.S. actions directed against U.S. citizens or U.S. interests."

Kerry warned Friday that the "consequences" will be far more stringent should Putin sign off on the "back-door annexation" of Crimea. Lawmakers in Moscow are due to vote next Friday on accepting Crimea into the Russian Federation should there be a "yes" vote in the referendum.

At the same time, Kerry opened the door for less strident measures should Russia opt not to take in Crimea -- whatever the referendum says -- and instead go along with greater autonomy