LONDON - Scientists who are part of a government scientific advisory group from the United Kingdom said it is "almost certain" a new COVID-19 variant will emerge that will render current vaccines ineffective.

The advisory group published a research and analysis paper on the long-term evolution of COVID-19 on July 26. The paper explores several hypothetical, but highly likely, scenarios of what humanity can expect in the long-term from COVID-19 based on current trends and data.

Scientists wrote that since the eradication of the novel coronavirus is "unlikely," there are sure to be new variants that emerge and infect the population at large.

"For this purpose, we consider mutations in the ‘body’ of the virus (the viral genes that are expressed in infected cells and control replication and cell response), that might affect virus fitness and disease severity, separately from mutations in the spike glycoprotein that might affect virus transmission and antibody escape," according to the analysis. 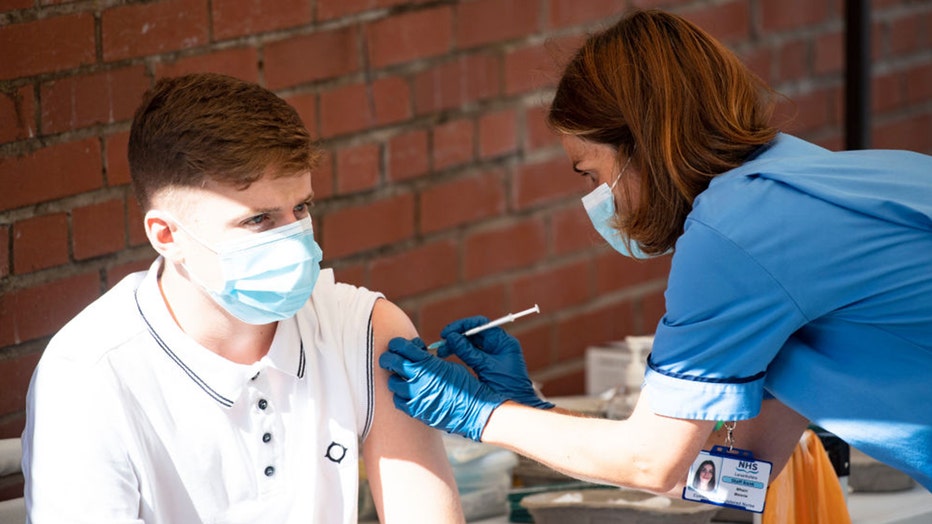 FILE - COVID-19 vaccinations take place at a pop-up vaccination center outside of Fir Park ahead of kick-off during the cinch Premiership match between Motherwell and Hibernian at Fir Park on Aug. 1, 2021, in Motherwell, Scotland. (Craig Foy/SNS Group via Getty Images)

RELATED: COVID-19 Delta variant symptoms: What we know and what to look for

In the first hypothetical scenario, scientists posited the emergence of a new variant that causes more sickness in a larger proportion of the population than has occurred to date.

As more people continue to become infected with variants such as delta, it is "highly likely" a scenario in which a new variant that is far more infectious and far more transmissible will arise, causing a surge in new cases, according to the scientists.

But the authors noted that current vaccines will most likely protect against severe illness from new variants.

Authors hypothesized that since COVID-19 is still prevalent among the larger population, there is a very high likelihood a new variant will emerge, creating a strain of the novel coronavirus that can evade current vaccines. The new variant will create a need for a modified vaccine, which could likely come in the form of a yearly booster shot, similar to the flu vaccine, the scientists said.

Other hypothetical but likely scenarios that could arise in the near future are COVID-19 variants that are resistant to drugs and other antiviral therapies, as well as the possibility of the novel coronavirus losing its virulence over time.

"In other words, this virus will become like other human CoV that causes common colds, but with much less severe disease predominantly in the old or clinically vulnerable," the paper reads.

As the world continues to adapt to the novel coronavirus and mutations such as the delta variant, authors suggested continued research, funding and surveillance of COVID-19 and any variants that follow.

"Coronaviruses have been studied for many decades and what has happened in other coronaviruses infections of humans and animals may paint a picture of the evolutionary journey of SARS-CoV-2," authors wrote.

The U.S. Centers for Disease Control and Prevention listed the delta variant as a variant of concern in the United States and have noted it is more transmissible than previous variants.

New evidence from the CDC released on July 29 revealed that the delta variant can be as contagious as chickenpox. A surge in new cases being spurred on by the newest variant of concern has led the CDC and federal health officials to reverse their recommendations on mask-wearing indoors.

Meanwhile, countries in Europe are attempting to breathe new life into dwindling vaccination rates by bringing the shot to vacationers. It’s all part of an effort to maintain momentum in campaigns to protect against the pandemic that has killed more than 1 million across the continent, including in the European Union, the United Kingdom and Russia.

From France’s sun-kissed Mediterranean coast to the azure waters of Italy’s Adriatic beaches and Russian Black Sea resorts, health authorities are trying to make a COVID-19 shot as much part of this summer as sunscreen and shades for those who are not yet fully vaccinated.

The new drive to take shots to tourists is a way of adapting to Europe’s annual summer migration, when it seems whole cities empty of their residents for weeks. Those long absences from home pose a particular challenge for many nations European, where public health systems often focus on delivering vaccines to people based on where they live.

In Britain, where 70% of adults already are fully vaccinated, campaigns now are aimed at the younger generations with walk-in pop-up clinics in parks, a recent event complete with DJ at the Tate Modern museum and shots on offer to music lovers at the Latitude Festival.

Across the pond, the United States on Monday finally reached President Joe Biden’s goal of getting at least one COVID-19 shot into 70% of American adults — a month late and amid a fierce surge by the delta variant that is swamping hospitals and leading to new mask rules and mandatory vaccinations around the country.

The U.S. still has not hit the administration's other goal of fully vaccinating 165 million American adults by July 4. It is about 8.5 million short.

Those are still well below the 3,400 deaths and a quarter-million cases per day seen during the worst of the outbreak, in January. But some places around the country are watching caseloads reach their highest levels since the pandemic began. And nearly all deaths and serious illnesses now are in unvaccinated people.