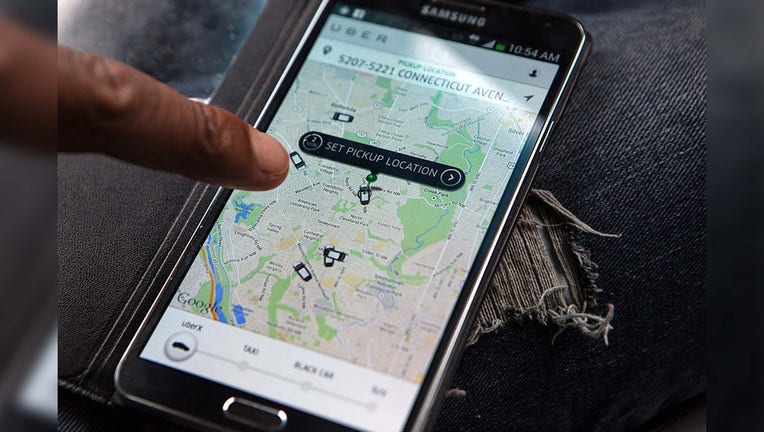 UberX driver, Michael Belet, checks the Uber customer app to see where other Uber drivers are working so he can determine where the best place for him to get fares might be, April 7, 2014, in Washington, DC. Thousands of local car owners have signed

WASHINGTON - Uber is launching a new audio recording option for drivers and riders during trips. This new feature is part of several new safety initiatives the company is starting.

According to a press release from the company, a rider and driver can enable the audio recording feature by choosing to record audio by pressing the shield icon on the map screen in the app and choosing "record audio."

Both Uber drivers and riders have the option to record trips. Prior to the trip, Uber will inform the rider in their app if a driver has opted to use the audio recording feature.

Audio recording files are encrypted and stored on the rider and Uber driver's devices to help protect their privacy. No one can listen to the audio, including Uber. The company states that if a rider or driver submits a safety report to Uber, the audio recording can be added to the report.

The new audio recording will be featured in three American cities later this month. Uber didn’t specify yet which cities these will be.

This program was first launched in Latin America almost two years ago to better support riders and drivers who reported safety incidents to Uber. Currently, the audio recording feature is available in 14 countries including, Mexico and Brazil, according to Uber.

RELATED: Uber driver pulls over to call police on passenger who had gun

The audio seat belt alert reminds a driver to buckle their seat belt before a trip. According to Uber, the audio alert will come from the driver's phone. A push alert is sent to the rider's phone notifying them to fasten their seat belt. This safety feature is slated to launch in 2022.

Uber's new enhanced RiderCheck feature can detect potential problems with a trip. If this happens, the rider and Uber driver will get a "RideCheck" message asking them if everything is alright.

The rider and driver can inform Uber via the app that things are fine and there's an option to use the emergency button or report a problem to the company's Safety Incident Reporting Line.

In 2019, Uber launched the RideCheck feature using GPS data and sensors in the Uber driver's smartphone to determine if a crash occurred or if there was a long stop during a trip.