Starting on January 1st, Uber rides from Seattle are expected to increase 24%, according to the company.&nbsp;

LOS ANGELES - Uber and Lyft have teamed up to create a database of drivers ousted from their ride-hailing services for complaints about sexual assault and other crimes that have raised passenger-safety concerns for years.

The clearinghouse unveiled Thursday will initially list drivers expelled by the ride-hailing rivals in the U.S. But it will also be open to other companies that deploy workers to perform services such as delivering groceries or take-out orders from restaurants

The new safeguard, dubbed the "sharing safety program," will be overseen by HireRight, a specialist in background checks. The use of a third party is aimed at addressing potential legal concerns about companies, including competitors such as Uber and Lyft, having access to information to each other’s personnel matters.

Lyft and Uber are competitors in a whole lot of ways, but on this issue of safety, we completely agree that folks should be safe no matter what platform they choose," Tony West, Uber’s chief legal officer, told The Associated Press. He spoke in an interview that also included Jennifer Brandenburger, Lyft’s head of policy development.

The safety program follows through on a promise that Uber made 15 months ago when it revealed that more than 3,000 sexual assaults had been reported on its service in the U.S. during 2018.

Since that revelation, San Francisco-based Uber and Lyft have been working to navigate through antitrust and privacy concerns to create a way to flag drivers who have engaged in violent or other abhorrent behavior that culminated in them being booted off their services.

Sharing the information about reported sexual assaults is considered especially important because victims of such crimes frequently don’t file formal complaints with police. That gap has opened a crack for potentially dangerous drivers to slip through routine background checks drawing upon legal records, Brandenburger said.

Only "fraction of a fraction" of drivers have engaged in behavior that fall into those categories, West said. Any company with access to the clearinghouse of information could still decide to allow a driver on its service after its own investigation, West said. 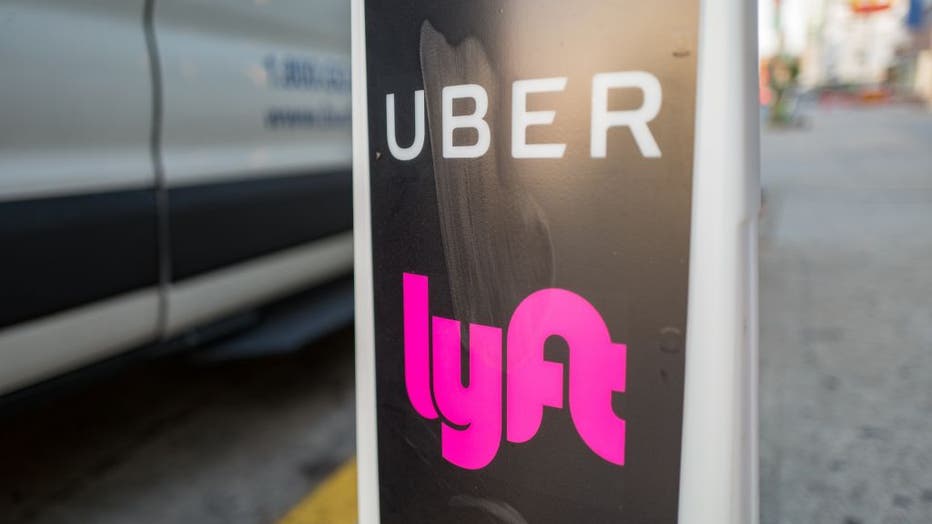 Close-up of vertical sign with logos for ridesharing companies Uber and Lyft, with wheels of a car in the background, indicating a location where rideshare pickups are available in downtown Los Angeles, California, October 24, 2018. (Photo by Smith C

Michael Wolfe, a Uber driver who also leads a Washington state group representing about 2,000 other drivers, praised both ride-hailing services for trying to weed out the abuses in the industry.

"The few bad apples give all us drivers a bad name," said Wolfe, executive director for Drive Forward.

The added layer of protection was hailed by the Rape, Abuse, & Incest National Network, a victims’ rights group that has criticized the ride-hailing services for not doing more rigorous screening of their drivers.

"Sexual violence thrives in secrecy," said Scott Berkowitz, the network’s president. "Thanks to this initiative, perpetrators will no longer be able to hide or escape accountability by simply switching ridesharing platforms."

It could also help appease U.S. lawmakers, who have criticized Uber and Lyft in the past for inadequate safety protections for their riders.

Lyft hasn’t delivered on its promise to release a report about past problems on its service because the company is waiting for Uber to resolve a privacy dispute with California regulators, according to Brandenburger.

After Uber detailed past abuses on its service in its December 2019 report, California’s Public Utilities Commission sought the victims’ names and contact numbers. After Uber rebuffed the request to protect the victims’ privacy, the agency slapped the company with a $59 million fine. The dispute is now in the appeals process.

The safety feature is rolling out at a time when both ride-hailing services are still trying to rebound from the pandemic-driven lockdowns that have prevented people from traveling and curtailed demand for rides, especially from strangers.