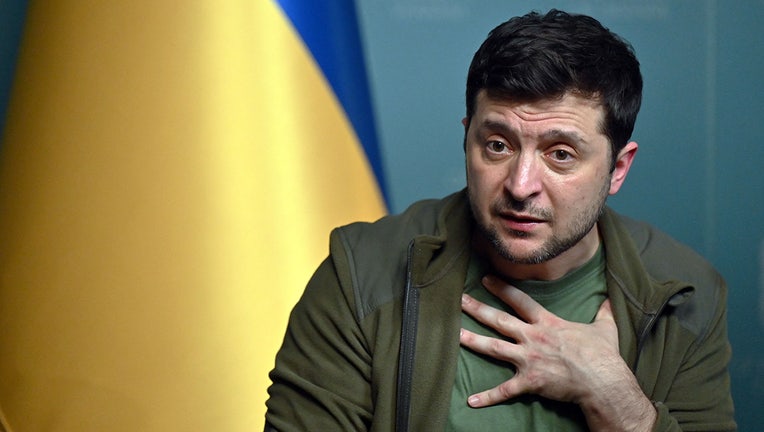 Ukrainian President Volodymyr Zelensky speaks during a press conference in Kyiv on March 3, 2022. (Photo by SERGEI SUPINSKY/AFP via Getty Images)

OLYMPIA, Wash. - U.S. senators and representatives spoke with Ukrainian President Volodymyr Zelenskyy on Saturday, who urged them to help achieve "victory over injustice."

Washington Sen. Maria Cantwell was on the video call, which included more than 300 officials from the House and Senate.

Cantwell said the U.S. must ramp up its sanctions on Russia, to economically pressure the country to end its invasion of Ukraine.

Cantwell issued the following statement after the call:

"President Zelenskyy asked members of Congress to help him achieve ‘a victory over injustice’ and to help Ukraine, which he said is now ‘representing the ideals of the world we should all live in.’

"He asked for further help for Ukraine, where he said ‘brave and strong people are standing up for our common values and asking powerful leaders to help them from being exterminated.’

"President Zelenskyy asked for security in the skies, asked that Most Favored Nation status for Russia be revoked, and for U.S. companies to leave Russia and for credit card companies to cut service.

"The United States should use our economic might with sanctions and further economic measures to put additional pressures against Russia."

Gov. Inslee on Friday signed a formal directive for state agencies to identify any Russian contracts or investments, and prepare to cut ties with them immediately. Agencies must present an initial summary to the Governor's Office by March 18.

Additionally, the Washington State Investment Board is taking action to eliminate any holdings, Inslee said.

The investment board posted on its website that the relevant estimated equity fund exposure with Russia is about $100 million or less than 0.10% of total assets.