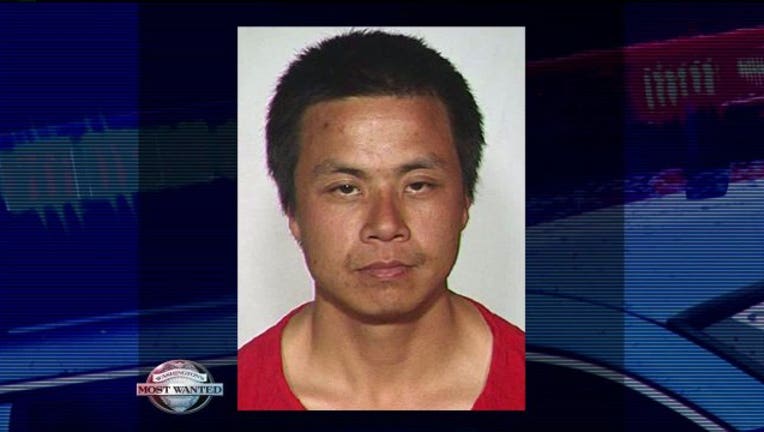 FUGITIVE CAPTURED April 8, 2013 --Seattle police say the U.S. Marshals Pacific Northwest Fugitive Apprehension Task Force tracked down and arrested Hung Minh Pham in Burien. FUGITIVE WANTED IN SEATTLE March 29, 2013 – Hung Minh Pham has a violent history with a woman he has been accused of choking and burning her clothes that caused a fire and threatened other people in the building. Seattle detectives said he has a long criminal record and is wanted in a brutal attack on two women. There is now a $1 million warrant out for his arrest. Detectives said Pham went to an apartment and used a wooden shelf to beat his girlfriend’s friend. And when his girlfriend came out of the bathroom, cops said he pushed her to the ground, choked her and punched her in the face – and then choked her again until she passed out. When she came to, she told officers Pham kicked her again and again in her lower back. Her friend tried to stop him, to allow her to get away. Cops said Hung Pham is armed and dangerous: "This guy is also known to carry a knife and, in fact, he's been seen with an ice pick. Why do you carry an ice pick around? Well, it's a weapon so this guy is truly a dangerous individual," said retired detective Myrle Carner with Crime Stoppers of Puget Sound. Hung Pham is 42 and has arrests for robbery, burglary, theft, assault and resisting arrest. Police said Pham could be in the White Center area or southwest Seattle. If you can tell police where he is, call Crime Stoppers at 800-222-TIPS. It's always anonymous and you can receive a reward for information that leads to his arrest. You can text a tip here.