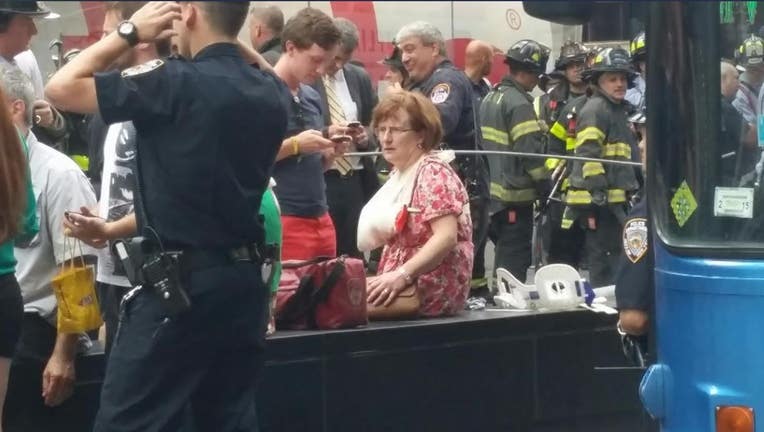 A light pole came down on a normally packed sidewalk next to the TKTS booth at 47th Street and Seventh Avenue.

A fire official at the scene said the number of injuries was surprisingly low given the size of the pole that was knocked down.

"I thought people were going to die," said Ida Bailey, an employee of one of the bus lines involved in the accident. "I started praying."

Bailey said a GrayLine bus -- with a driver and tour guide -- apparently was unable to stop and struck a light pole or traffic light before hitting a CitySights tour bus packed with passengers.

"The driver told me the brakes weren't working and he couldn't stop," she said.

Earthcam video from the scene showed pedestrians running from the crash site moments before a towering pole crashed to the sidewalk, appearing to strike a man in the leg and narrowly missing his head.

Bailey said most of the injuries appeared to take place on the crowded sidewalk. A fire official said most injuries happened on the sidewalk, in part when people were struck by flying debris.

None of the injuries are considered life threatening, police and fire officials said.

Times Square is a popular launching spot for the ubiquitous double-decker buses which take tourists around Manhattan.

After the accident, dozens of tourists stood at what is sometimes called the "Crossroads of the World," taking pictures and video of the crash scene.

The NYPD was investigating the cause of the accident.