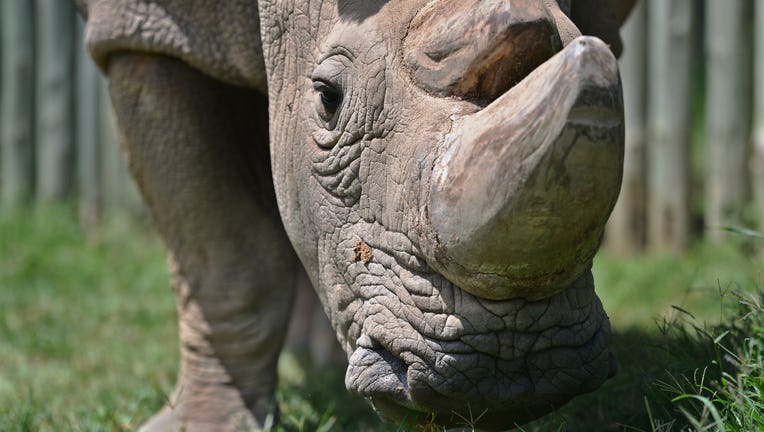 A northern white rhinoceros grazes in his paddock at the Ol Pejeta conservancy in Laikipia County at the foot of Mount Kenya. (Tony Karumba/AFP/Getty Images)

Herdade Lokua, 34, and Jospin Mujangi, 32, admitted that beginning in November 2019, they agreed to smuggle elephant ivory, white rhinoceros horn and pangolin scales to the United States. Authorities said they worked with a middleman to negotiate sales and coordinate imports to Seattle.

Between August and September 2020, Lokua and Mujangi admitted to shipping three packages containing approximately 49 pounds of ivory from Kinshasa, according to the Department of Justice. The packages were falsely labeled as containing wood. In June 2021, they sent nearly five pounds of rhinoceros horn to Seattle using a similar scheme.

The two defendants traveled to Seattle on November 2, 2021, to meet with prospective buyers who were actually undercover federal agents. After negotiating the details of a large shipment of wildlife, agents arrested both men in Edmonds, Washington.

Police: 2 men arrested in Edmonds for trying to sell $3.5M worth of poached ivory, rhino horn

The investigation was part of "Operation Kuluna" conducted by the Office of Homeland Security Investigations (HSI) in Seattle, the Government of the DRC and the U.S. Embassy in Kinshasa. After the arrests, the task force in DRC seized 2,067 pounds of ivory and 75 pounds of pangolin scales in Kinshasa worth approximately $3.5 million.

Lokua and Mujangi were charged under the Lacey Act, the nation’s oldest wildlife trafficking statute that prohibits falsely labeling shipments that contain wildlife. The United States, DRC and approximately 181 other countries are signatories to the Convention on International Trade in Endangered Species of Wild Fauna and Flora (CITES). CITES is an international treaty that restricts trade in species that may be threatened with extinction.

The CITES treaty has listed the white rhinoceros as a protected species since 1975, the African elephant since 1977 and all species of pangolin since 2017. All three mammals are threatened by poaching and habitat loss.

The sentencing hearing for Lokua and Mujangi is scheduled for November 1.