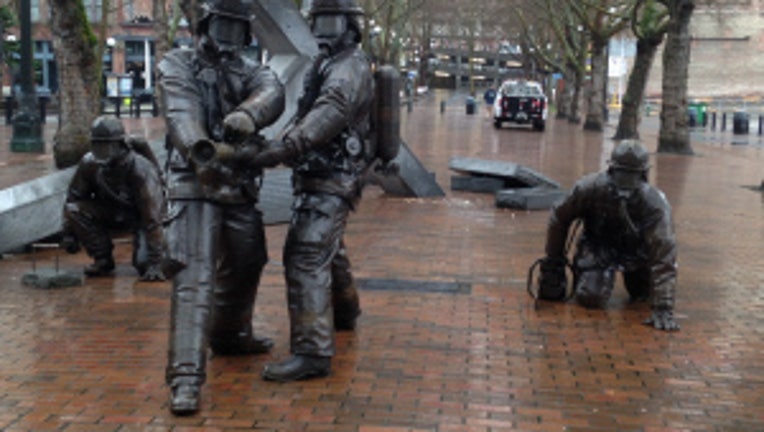 SEATTLE - Seattle Police arrested three people for attacking a sleeping, homeless man in Pioneer Square Saturday night.  Seattle Police and Fire Department sources confirm that two of those arrested were off-duty Seattle firefighters.  Seattle Fire Department Lt. Sue Stangl said that the two firefighters, both males, joined a female in attacking the homeless man around 6 p.m. who was reportedly sleeping on the Seattle Firefighters memorial in Pioneer Square. During the attack the homeless man produced a knife and stabbed one of the firefighters, who was seriously hurt; medics transported the firefighter to Harborview Medical Center, where his condition is not known.  Seattle Police said that a witness saw the attack, which reportedly started when the woman yelled at the homeless man for sleeping on the memorial and proceeded to kick the man, the Seattle Times reported. One of the off-duty firefighters picked up a stick and started hitting the victim, as the other firefighter joined in, the paper reported.  The second firefighter and the woman were not hurt. Police arrested the woman and one of her companions, said Police Department spokeswoman Renee Witt.  Her other companion was not booked Saturday booked because of his injuries, she said.  Witt said all three suspects were reportedly intoxicated. Witt said the homeless man was taken to the hospital, too, but Stangl said he refused treatment. Stangl said that one of the firefighters has been with the Seattle Fire Department since 1999, the other since 1997.  One firefighter works at Fire Station 5 and last worked on March 13th.  The other firefighter works at Fire Station 32, but has been on disability since early January 2014. Stangl didn't identify either of the firefighters and she didn't know if the firefighters would be disciplined, since they were both off- duty.