Two King County deputies are hospitalized after sustaining gunshot wounds from a deadly shooting near a Woodinville apartment complex. One suspect was shot and killed.

WOODINVILLE, Wash. - Two King County sheriff's deputies were shot and injured, and a suspect is dead after the two officers responded to a call for suspicious activity at an apartment complex in Woodinville Monday afternoon. 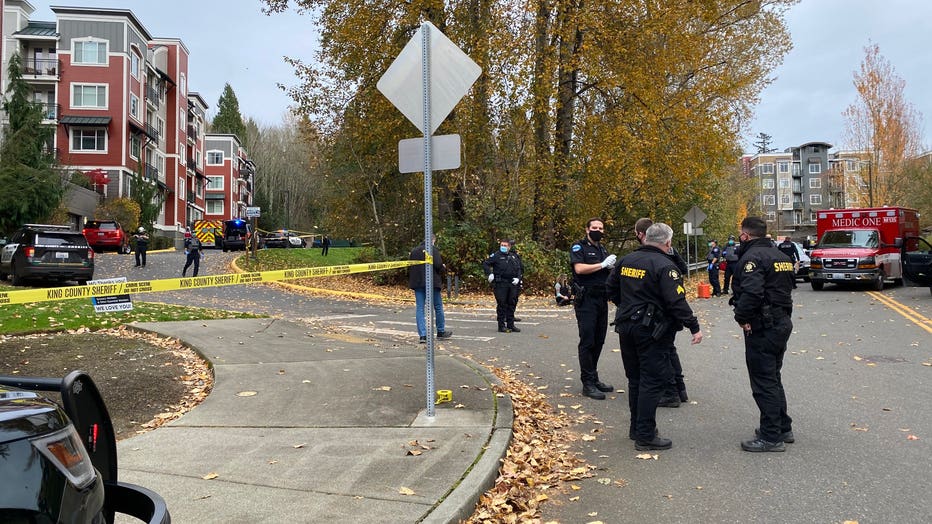 Officials said the two deputies responded to a call of a person reportedly breaking into cars at the complex. The deputies confronted the suspect who was carrying a case and shortly after, gunfire was exchanged between deputies and the suspect.

Officials initially said one of the deputies was in critical condition, but the King County Sheriff's Office later clarified on Twitter that both of the deputies suffered serious - but not life-threatening - injuries.

One of the deputies, a 55-year-old man, was in satisfactory condition. Around 6 p.m. a spokesperson with HMC said he has since been released from the hospital. The other deputy was taken to EvergreenHealth Medical Center in Kirkland and was in stable condition pending discharge, according to a hospital spokesperson.

The suspect was killed at the scene.

Police continued to keep their presence at the apartments late into the night.

"It’s sad. Sad for whatever happened. I’m also sad for whoever was being comforted. Witnessed it. I’m sad that this happened in our neighborhood as well," said neighbor Jerome Jefferson.

The Seattle Police Department's Force Investigation Team is handling the criminal investigation, since deputies with the sheriff's office were involved.