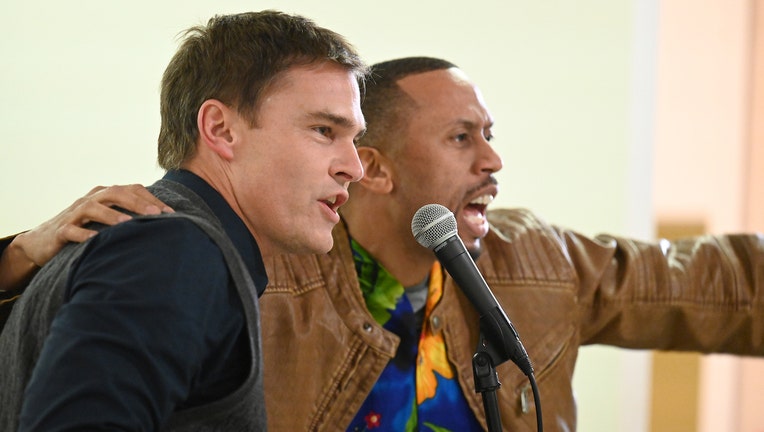 Chicago - Welcome back to "Welcome to Flatch" recaps! In the first of tonight’s two episodes, "The Devil's Backbone," Kelly and Shrub plan to increase their social media following by recording a surprise reunion with Father Joe and another former member of his religious boy band, A-Men. Then in "On The Hooky," Shrub gets a new job detailing cars while Father Joe, Kelly, Cheryl and Mandy play hooky. Just starting the show? Here’s our recap of the premiere. Ready to binge? The first 10 episodes are streaming on Hulu.

After last week’s heavier episode, "Welcome to Flatch" lightens things up considerably this week with the show’s first double-header installment. Both "The Devil's Backbone" and "On The Hooky" lean into the goofier side of the series. And while we don't get much follow-up to the drama of Shrub (Sam Straley) and his new girlfriend Beth (Erin Bowles) breaking up thanks to the meddling of his cousin Kelly (Holmes), we do get plenty of laughs.

"On The Hooky" is the stronger of the two episodes, but "The Devil's Backbone" offers some highly anticipated follow-up for Father Joe (Seann William Scott) and his days in the Christian boy band A-Men. (They were huge in Germany.) So let's dive into tonight's two-for-one "Flatch" special!

Can we get an A-Men? 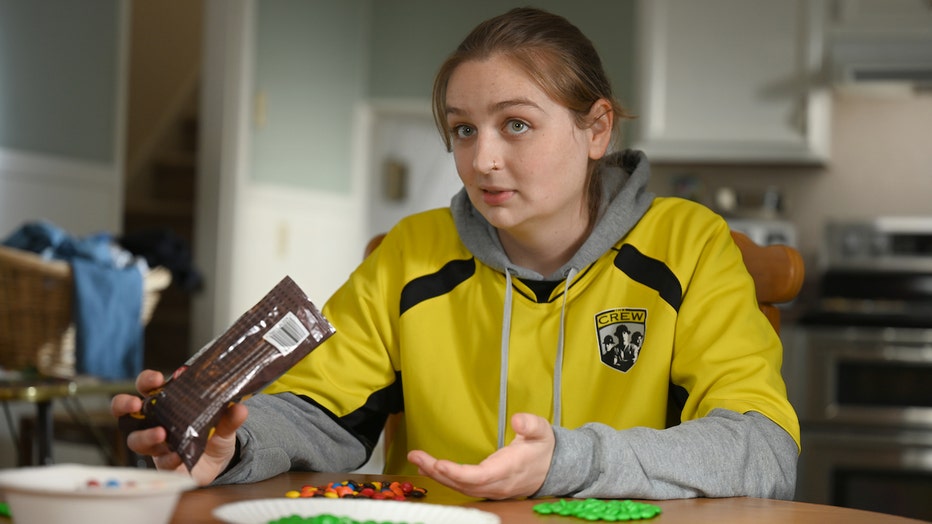 There are a couple different ideas linking this week’s two episodes. One is the slow-boiling tension between Shrub’s interest in moving forward in life and Kelly’s wish to keep things exactly as they are. And the other is the Mallet cousins’ desperate desire to go viral and become influencers, which hasn’t quite happened with their videos of breaking stuff at the dump or bear macing Shrub in the face. (They’ve never gotten over 25 views.) Looking for a new angle, they decide the quickest way to internet fame is to film an emotional surprise reunion between Father Joe (Seann William Scott) and his old A-Men bandmate Julius (Affion Crockett).

There are a couple wrinkles to their plan, however. For one, it turns out Joe and Julius actually had a big falling out in their boy band days. And, for another, the only way Kelly could get Julius to visit Flatch was by telling him that Shrub was a terminally ill fan. Unfortunately, she failed to tell Shrub about that part of the plan, so he has to bluff his way through his made-up super fandom — dance-alongs and all. 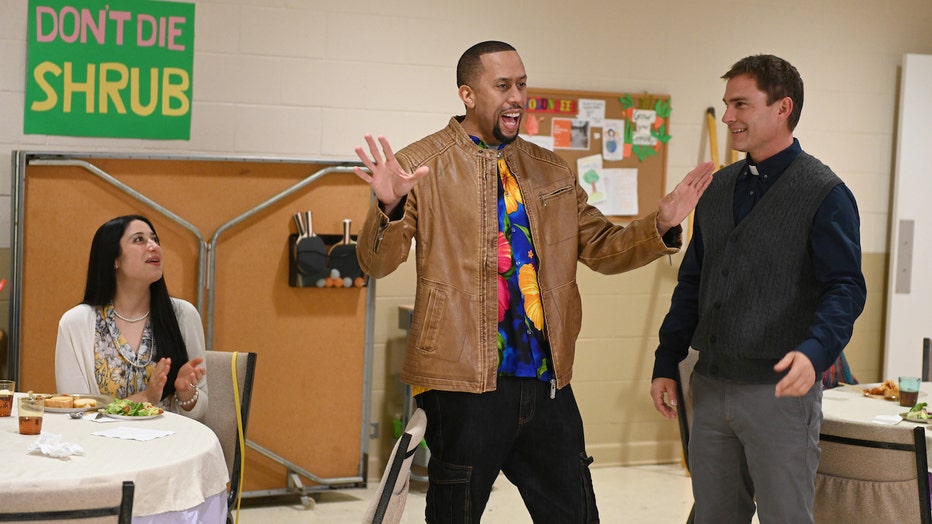 As is so often the case on "Welcome to Flatch," Kelly and Shrub’s antics inadvertently lead to some big revelations for the show’s characters.

Shrub’s brush with (fake) death forces him to reckon with how little he’s done with his life, especially when word of his (fake) terminal illness gets out but no one in Flatch checks in to see how he’s doing.

Meanwhile, Julius’ reappearance forces Joe to face his complicated history with A-Men. It turns out it was Joe’s egotistical desire to go solo that caused the band to fall apart in a very public manner at "the Godies"— the religious music awards. "It’s hard to keep your ego in check when your face is on posters next to Jesus," Joe explains. And for years he’s been harboring a sense of guilt at robbing Julius of the thing he loved so much.

Except it turns out Julius has actually been thriving since his A-Men days. He has a solo career, kids, a gorgeous wife, two boats and a flourishing farm-to-jar tomato sauce company. It’s enough to make Joe’s quiet life in Flatch look pretty depressing by comparison. And like Shrub, Joe has a little bit of an internal panic about where he’s at in life. 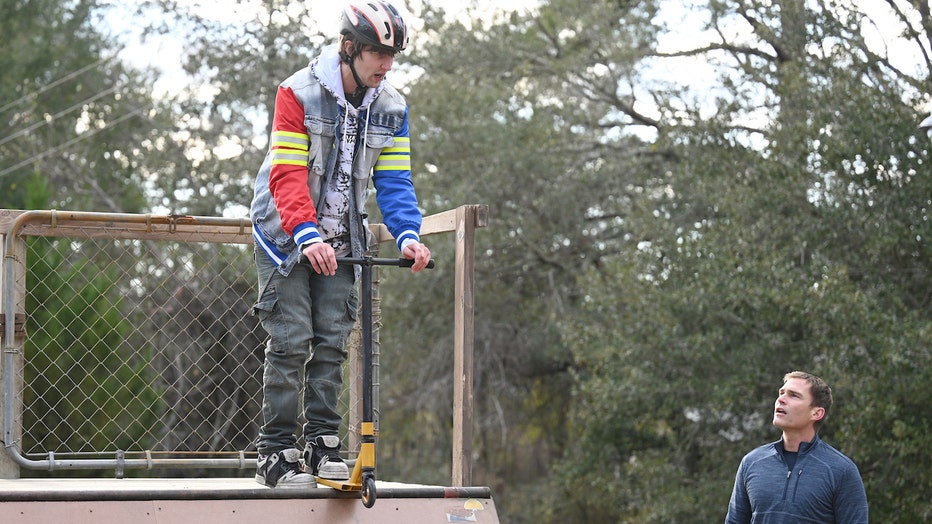 In the end, however, both Shrub and Joe come away from this episode with a new lease on life: Shrub finally conquers his life-long fear of the "devil’s backbone," which he describes as a super scary drop-off that kids would ride down on their scooters, although it’s actually just a small halfpipe at a local skate park. Joe, meanwhile, makes peace with the fact that he likes his life as it is — even if he’s not living his perfect pop star dreams. (It helps that Julius’ two boats turn out to be kayaks.)

The whole thing ends with a big pasta dinner down at the church, where Shrub confesses to the very confused residents of Flatch that he’s not actually dying — right after they put together a surprise fundraiser for him. Then Joe and Julius reunite for an impromptu concert, much to the delight of A-Men superfan Cheryl (Aya Cash). It’s the perfect opportunity for Kelly to film a video that really would go viral... if only her phone hadn’t died. 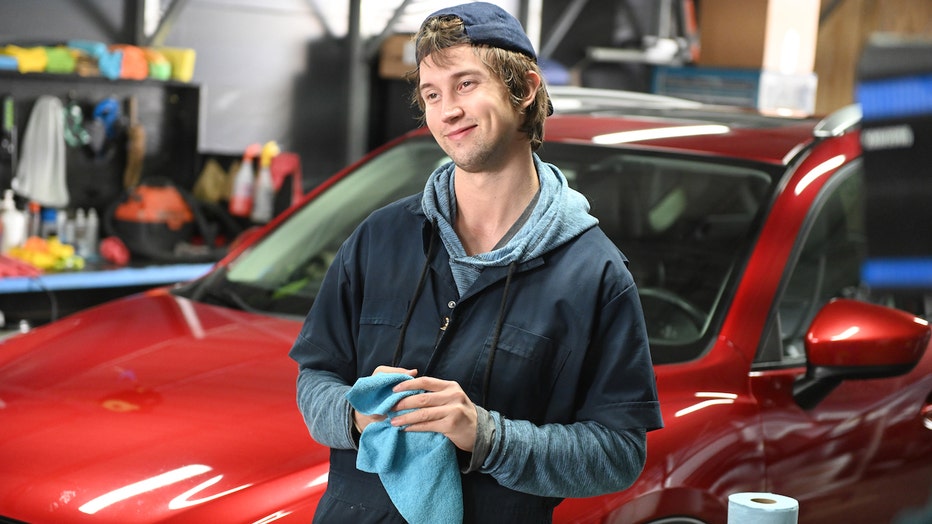 "On The Hooky" follows up on Shrub’s newfound sense of drive and purpose, as the formerly aimless young Mallet starts a new job detailing cars at the dealership owned by the family of his old high school classmate Dylan (Kyle Selig). That means it’s Kelly and Shrub’s first Saturday apart since 2004. And considering Kelly can barely get through a meal without Shurb having to save her from nearly choking, that’s a pretty big shift for both of them.

Father Joe, meanwhile, is struggling to write his sermon for the next day’s Sunday service. And when he decides to work through his writer’s block by hitting a few balls down at the driving range, "Welcome to Flatch" gets to have fun shaking up its usual dynamics with some new character combos.

Looking for something to do without Shrub, Kelly invites herself along to Father Joe’s golf game. And inspired by Joe’s impromptu day off, Cheryl and Mandy (Krystal Smith) decide they should play hooky themselves and head out for an afternoon of day-drinking at a local bar. 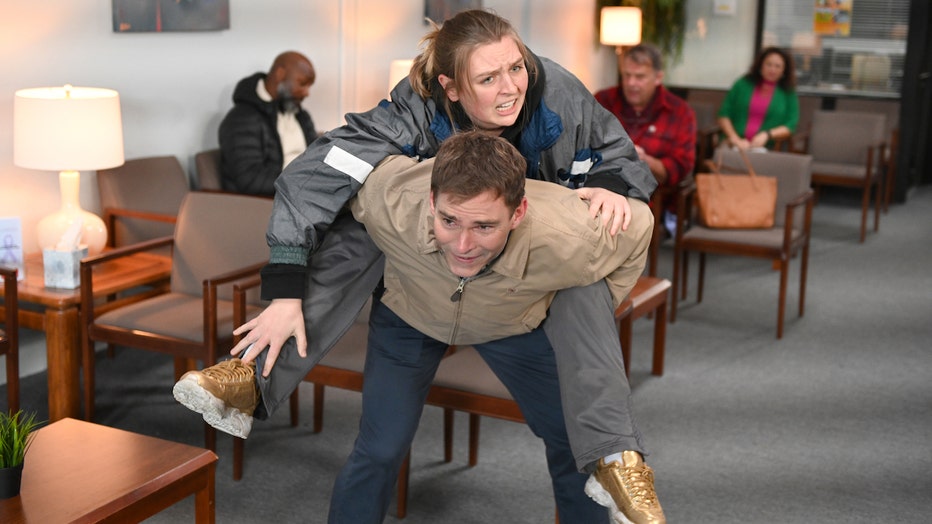 Both subplots have some very funny moments. Uncouth Kelly and buttoned-up Joe are a great double act, especially once Joe accidentally hits Kelly in the leg with a golf ball and has to rush her to the ER. Though Kelly’s leg doesn’t have so much as a bruise, she acts like she’s got a life-threatening injury — one she’s happy to milk for attention on social media. And though Father’s Joe inadvertent day of service would seem to lend itself perfectly to a sermon, he hilariously misses out on that connection entirely. "Guess I’m gonna have to recycle my Earth Day material again," he sighs.

Meanwhile, the Mandy/Cheryl subplot locks into a mixture of tenderness and frankness that’s starting to feel like this show’s sweet spot. After they order drinks at the bar, a woman named Maureen comes over to hit on Mandy and then finds herself drawn to Cheryl as well. And Cheryl’s cheerfully naive attempts to be Mandy’s wing woman contrasts perfectly with Mandy’s detached bemusement at the entire situation.

The whole thing is very low stakes, as it turns out Maureen isn’t even Mandy’s type. (As Mandy explains, "My type plays it cool, has a little meat on their bones and owns zero cardigans if they’re a woman and lots of cardigans if they’re a man.") And it ends with a perfect button where Maureen thinks Mandy and Cheryl are a couple, and Mandy gets a big belly laugh out of the entire experience.

It’s all in the details 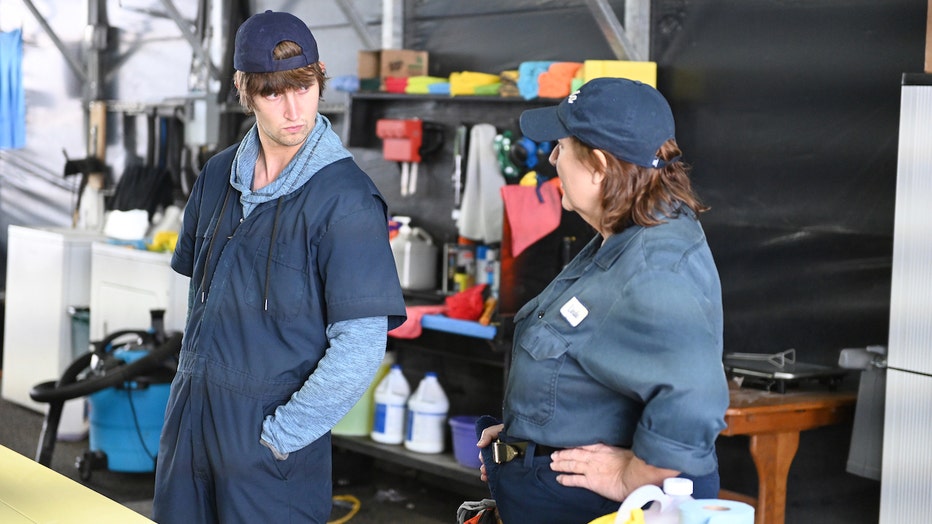 But the heart of this episode is in Shrub’s first day at the dealership. His adorable excitement at showing off his new workplace ("unlimited sugar packets, which is dope") soon gives way to a bit of trepidation about his surly new coworkers. There’s some light hazing along with a host of new rules — phones have to be locked away in a box during work, for instance. But it turns out Shrub has a natural knack for cleaning cars.

His manager Linda immediately spots his artistic talents after he vacuums the word "boobs" into the carpet of a Camry, and she sets about making him her cleaning protégé. And that sparks something in Shrub. "Linda is a great boss," he gushes. "Other than Father Joe, basically zero other adults have ever believed I could do anything, ever." Shrub even starts to make friends with his co-workers, especially once he tells off Dylan in front of them for being a "suit." ("The Devil's Backbone" also reveals Dylan and his wife Nadine are trying to have another baby, so it's quite the week for him.) 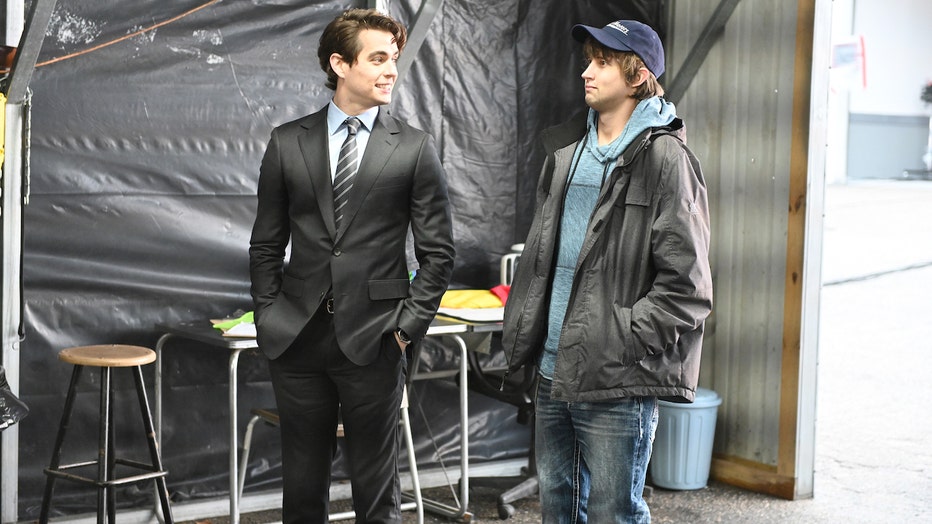 We’ve never seen Shrub thrive the way he does here, which is quite the contrast to Kelly’s Saturday. While Shrub is gaining new friends and finding unexpected fulfillment (not to mention getting paid!), Kelly is completely lost without her cousin. And that disparity really becomes clear when Kelly can’t even listen to Shrub talk about his day because she’s too busy complaining about how he wasn’t there for her. Could the two close-knit cousins be heading towards a potential rift? We’ve got two more weeks to find out before "Flatch" signs off for the season.

"Welcome to Flatch" airs Thursdays on FOX. The first 10 episodes are also currently available to stream on Hulu. Recaps run weekly, and you can read them all below.

The Freak Brothers (2021): Smoke 'em if you got 'em! Pete Davidson, Woody Harrelson and John Goodman lead the voice cast of this adult animated stoner comedy based on Gilbert Shelton’s cult classic comic, "The Fabulous Furry Freak Brothers." The series follows three 1960s hippie stoners who smoke a magical strain of weed, only to fall into a 50-year slumber and wake up in the 2020s. While time (and weed culture) may have changed, the Freak Brothers are just as mellow as ever. "The Freak Brothers" is a Tubi Original. Rated TV-MA. One season, 8 episodes. Also featuring the voices of Tiffany Haddish, La La Anthony, Adam Devine.

Staged (2020): We wouldn’t go so far as to call this David Tennant/Michael Sheen meta-comedy the only good "pandemic show," but it’s certainly one of the best — if only because it accurately captures the surreality of those early months better than any well-meaning drama ever could. Tennant and Sheen play fictionalized versions of themselves who are trying to rehearse a play over Zoom during lockdown. Prepare for a delightful parade of deadpan guest stars (Samuel L. Jackson! Dame Judi Dench!) and Tennant’s many headbands. So many headbands. Rated TV-MA. Two seasons streaming on Tubi. Also featuring Georgia Tennant, Anna Lundberg.

The Nanny (1993): She was working in a bridal shop in Flushing, Queens when her boyfriend kicked her out in one of those crushing scenes. What was she to do? Where was she to go? She was out on her fanny. So over the bridge from Flushing to the Sheffield’s door. She was there to sell makeup, but the father saw more. She had style! She had flair! She was there! That’s how she — she being Fran Drescher’s distinctively-voiced, iconically-costumed protagonist — became one of the most unlikely and beloved sitcom stars of the 1990s. Rated TV-PG. Two seasons streaming on Tubi. Also featuring Charles Shaughnessy, Daniel Davis, Nicholle Tom.