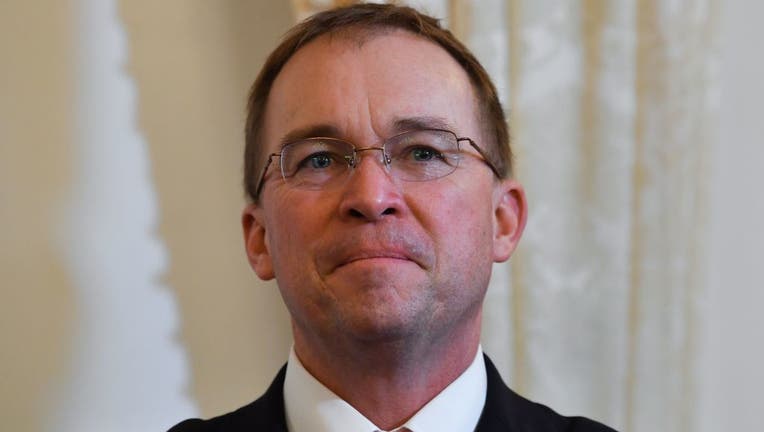 FILE - Acting White House Chief of Staff Mick Mulvaney look on during a briefing on the past 72 hours events in Mar a Lago, Palm Beach, Florida on December 29, 2019. (NICHOLAS KAMM/AFP via Getty Images)

President Donald Trump’s former chief of staff Mick Mulvaney believes Trump will run for president once again if he loses a second consecutive term, according to the Irish Times.

“I would absolutely expect the president to stay involved in politics and would absolutely put him on the shortlist of people who are likely to run in 2024,” Mulvaney said in a webinar for Institute for International and European Affairs, the Irish Times reported.

Mulvaney, who also served as Trump's director of the Office of Management and Budget before taking on his current role as the U.S. Special Envoy for Northern Ireland, noted that the president did not like losing and would be as old as Democratic nominee Joe Biden is now should he run again in four years.

Mulvaney described Trump as a “very high-energy 74-year-old” and expects him to be “further engaged in 2024 or 2028 if he were to lose this next election," according to the Irish Times.

Mulvaney also made the observation that Trump’s post-Election Day lawsuits were due to the election being “close” and it was only natural for both candidates to lawyer up.

Trump's campaign has filed lawsuits in a number of states where the result could mean his defeat in the race against Democratic challenger Joe Biden — though two of them were quickly dismissed by judges.

A Trump lawsuit was announced Thursday in Nevada, in addition to previously filed suits in Michigan, Pennsylvania and Georgia, as election officials counted votes in several states that were crucial to the outcome of the presidential election. The Trump campaign has also requested a recount in Wisconsin.

Judges dismissed the claims filed in Michigan and Georgia on Thursday. Meanwhile, Trump’s campaign won an appellate ruling to get party and campaign observers closer to election workers who are processing mail-in ballots in Philadelphia. The order did not affect the counting of ballots that was proceeding in Pennsylvania.

And while there has been speculation that if Trump were to lose the 2020 election, the transition of power would not be smooth, Mulvaney disagreed.

“Could things get really sloppy and messy and slow between now and then? Absolutely. They were, by the way in 2000 as well, yet we managed to work through it,” he said, referring to the contested George W Bush-Al Gore election.

“American elections can be a sloppy, ugly thing but it’s sort of like making law which we describe as making sausage: no one wants to see it happen but you enjoy the end product,” Mulvaney said.

The president spent Thursday at the White House, working the phones and escalating efforts to sow doubt about the outcome of the race. In a series of tweets, he pushed baseless allegations of electoral misconduct and said the ongoing vote count of ballots submitted before and on Election Day should cease.

Trump followed up with an all-caps official campaign statement.

Biden, meanwhile offered reassurance that the counting could be trusted and declared that “each ballot must be counted.”

“I ask everyone to stay calm. The process is working,” said Biden. “It is the will of the voters. No one, not anyone else who chooses the president of the United States of America.”

Biden’s victories in Michigan and Wisconsin put him in a commanding position, but Trump showed no sign of giving up. It could take several more days for the vote count to conclude and a clear winner to emerge.

The Associated Press and Kelly Taylor Hayes contributed to this report. This story was reported out of Los Angeles.