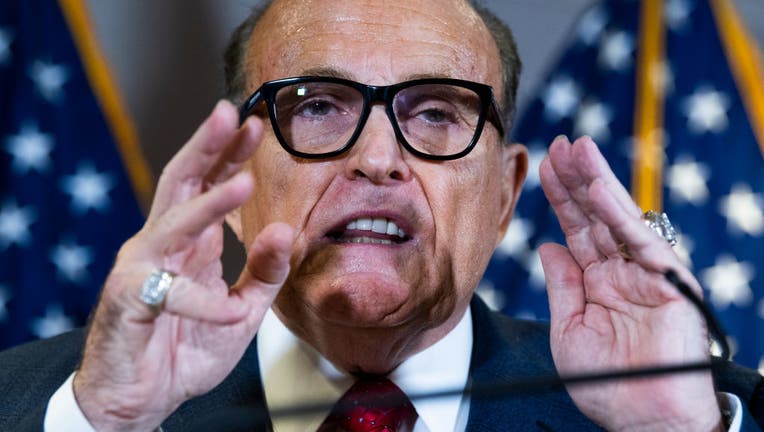 Rudy Giuliani, attorney for President Donald Trump, conducts a news conference at the Republican National Committee on lawsuits regarding the outcome of the 2020 presidential election on Thursday, November 19, 2020. (Photo By Tom Williams/CQ-Roll Cal

President Donald Trump said Sunday his personal attorney Rudy Giuliani has tested positive for the coronavirus, making him the latest in Trump’s inner circle to contract the disease that is now surging across the U.S.

Giuliani was admitted Sunday to Georgetown University Medical Center in Washington, according to a person familiar with the matter who was not authorized to speak publicly.

The 76-year-old former New York mayor has traveled extensively to battleground states in recent days and weeks in an effort to help Trump subvert his election loss. On numerous occasions he has met with local officials for hours at a time without wearing a mask.

Trump, who confirmed Giuliani’s positive test in a Sunday afternoon tweet, wished him a speedy recovery.

“Get better soon Rudy, we will carry on!!!” Trump wrote.

Giuliani attended a hearing at the Georgia Capitol on Thursday where he went without a mask for several hours. Several state senators also did not wear masks at the hearing.

On Wednesday night, Giuliani was in Lansing, Michigan, to testify in a highly unusual 4 1/2-hour legislative hearing in which he pushed Republican lawmakers to ignore the certification of Joe Biden’s Michigan victory and appoint electors for Trump. He did not wear a mask, nor did lawyer Jenna Ellis, who was sitting next to him. At one point, he asked one of his witnesses — a Detroit election worker — if she would be comfortable removing her mask. But legislators said they could hear her.

Before the hearing, Giuliani and Michigan Republican Party Chairman Laura Cox — both maskless — did a virtual briefing for GOP activists.

Giuliani made an appearance earlier Sunday on Fox News to speak about his legal challenges in several states on behalf of Trump.

His diagnosis came after his son, Andrew, tested positive for the coronavirus in late November. His son posted the news on Twitter.

Rudy's diagnosis came after several people connected to the White House, including President Donald Trump and First Lady Melania Trump, came down with the virus in recent months. Trump recovered after spending time at the Walter Reed National Military Medical Center in October, where he was given an experimental antibody cocktail.

The parents of a 5-year-old Texas girl are mourning after their daughter died tragically and unexpectedly of COVID-19.

Many of the cases were connected to a September event at the Rose Garden where Trump formally announced the nomination of Amy Coney Barrett to the Supreme Court.

The U.S. continues to see a surge in coronavirus cases. According to Johns Hopkins University, the country has seen more than 14.7 million cases since the pandemic started back in March. More than 281,000 Americans have died from the virus.

President-elect Joe Biden has signaled strongly that fighting the raging pandemic will be the immediate priority of his new administration, an abrupt shift from Trump’s more unworried approach to the virus.

Biden began with a direct appeal to all Americans to wear masks, a departure from Trump, who has mocked Biden and others who make a point of always wearing protective face coverings when around others. In an official move, the president-elect formed a coronavirus advisory board dominated by scientists and doctors, while Trump has had a falling out with the medical experts on his own virus task force.

However, the U.S. could roll out its first vaccine in the next several days. The U.S. Food and Drug Administration is currently reviewing experimental drugs from Pfizer/BioNTech and Moderna. Public hearings to review the data will be held later this month. If approved for emergency use authorization, the companies said they could begin distributing the vaccines shortly after the decision.

This is a developing story. The Associated Press contributed to this report.