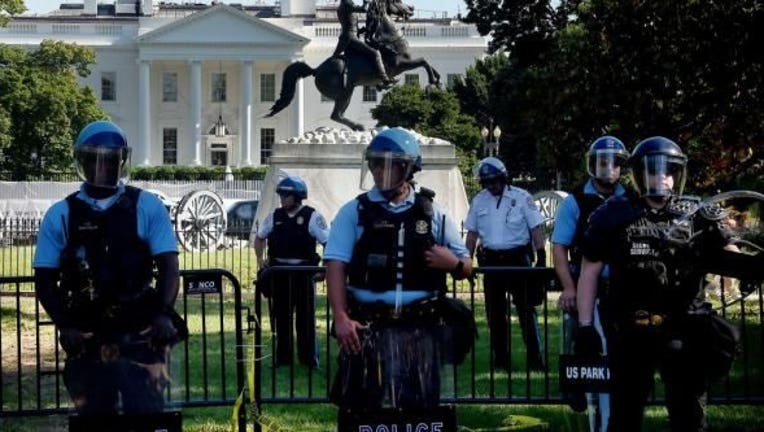 WASHINGTON, D.C. -- President Donald Trump announced on Monday that he is mobilizing all available federal resources, civilian and military, to end “destruction and arson” amid the George Floyd protests.

The president said that he has strongly recommended to every governor to deploy National Guard in sufficient numbers to “dominate” the streets until violence has been quelled.

Trump warned that if cities and states do not take actions that he deems appropriate to quell violence, then he will deploy the U.S. military “to solve the problem for them.”

Trump also said that he would be dispatching “thousands and thousands of heavily-armed soldiers” to stop rioting, looting, vandalism, assault and destruction of property.

“Our 7 p.m. curfew will be strictly enforced, those who violate it will be arrested detained and prosecuted to fullest extent of law,” the president said of the protests in D.C. while threatening lengthy sentences in jail.

Trump spoke at the White House as a large group of protesters demonstrated outside ahead of a citywide curfew. Just before Trump was scheduled to speak, police fired tear gas and deployed flash bangs to disperse the protesters, who appeared to have been demonstrating peacefully.

“Justice will be served, he will not have died in vain, but we will not allow the righteous cries of peaceful protesters to be drowned out by an angry mob,” Trump noted.

President Donald Trump on Monday derided many governors as “weak” and demanded tougher crackdowns on burning and stealing among some demonstrations in the aftermath of violent protests in dozens of American cities.

Trump spoke to governors on a video teleconference that also included law enforcement and national security officials, telling the state leaders they “have to get much tougher."

“Most of you are weak,” Trump said. “You have to arrest people.”

U.S. officials vowed to “maximize federal law enforcement presence” in the nation’s capital on Monday night after days of violent demonstrations led to fires across Washington and left scores of businesses with broken windows and dozens of police officers injured.

In the call with governors, Attorney General William Barr also encouraged more aggressive action against those who cause violence during protests across the country following the killing of George Floyd (https://apnews.com/GeorgeFloyd), a handcuffed black man who died after a white Minneapolis policeman pressed his knee into Floyd’s neck for several minutes even after Floyd stopped moving and pleading for air. The demonstrations have turned violent in several cities, with fires ignited in Lafayette Park across from the White House.

The comments from Trump, Barr and other federal officials appeared aimed at avoiding similar scenes on Monday night, when protesters are expected to gather again. But there are also questions about whether using more aggressive law enforcement measures against demonstrators protesting police brutality would only increase tensions.

Barr told the state leaders that law enforcement officials must “have adequate force” and “go after troublemakers.”

“Law enforcement response is not going to work unless we dominate the streets,” Barr said.

The president urged governors to deploy the National Guard, which he credited with helping calm the situation Sunday night in Minneapolis and demanded that similarly tough measures be taken in cities that also experienced a spasm of violence, including New York, Philadelphia and Los Angeles.

Between the protests and the response to the coronavirus pandemic, the National Guard has been deployed at its highest level in recent history, surpassing the number of troops sent to the Gulf Coast during Hurricane Katrina in 2005. More than 66,700 soldiers and airman have been activated — 45,000 to assist with the pandemic and more than 17,000 to help with the protests.

Other law enforcement resources are also being mobilized.

The Justice Department deployed the U.S. Marshals Service and agents from the Drug Enforcement Administration to supplement National Guard troops in Washington on Sunday. By midnight, Barr had ordered the FBI to deploy its Hostage Rescue Team, an elite tactical unit, to the streets of the nation’s capital, a senior Justice Department official said.

Barr has also directed the federal Bureau of Prisons to send teams of prison riot officers to patrol the streets in Miami and Washington, D.C., said the official, who could not discuss the matter publicly and spoke to The Associated Press on condition of anonymity.

The U.S. Park Police and Secret Service have had dozens of officers out in riot gear in Washington for the last few nights, in addition to the Metropolitan Police Department. U.S. Customs and Border Protection was also sending officers, agents and aircraft around the country to assist other law enforcement agencies “confronting the lawless actions of rioters,” the agency said. The officers were being deployed in several states, though the official declined to provide specific details, citing security concerns.

More coverage from FOX TV Stations across the U.S.

Washington, DC: DC curfew goes into effect tonight at 7, will last for 2 days

Houston: George Floyd's funeral to be held in Houston on June 9