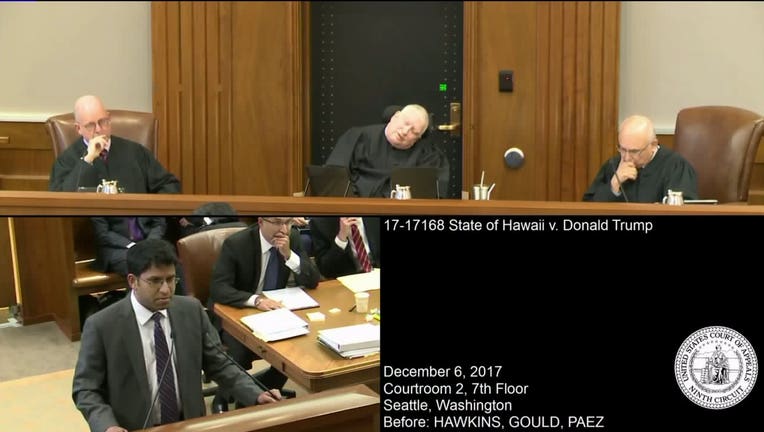 The hearing came just two days after the U.S. Supreme Court announced that it was allowing the restrictions to go into effect at least until the 9th Circuit panel and their colleagues on the Richmond, Virginia-based 4th Circuit had a chance to rule on separate lawsuits against the ban.

Debate over the restrictions has centered on whether they constitute a legitimate exercise of national security powers or the "Muslim ban" Trump promised during his campaign.

But much of Wednesday's arguments focused on a narrower point: whether the president satisfied immigration law in issuing his latest travel order, which targets 150 million potential travelers from Chad, Iran, Libya, Somalia, Syria and Yemen.

In June, Gould, Paez and Hawkins blocked Trump's second travel ban, saying he had not made a required finding that the entry of people affected by that measure would be detrimental to U.S. interests.

Neal Katyal, the former U.S. solicitor general representing Hawaii, insisted that Trump had failed again and did not have authority to issue his latest travel restrictions.

"They have not made the findings this court called for," Katyal said. "They came back with zero."

Deputy Assistant Attorney General Hashim Mooppan noted that the government had conducted a 90-day, multi-agency review, after which Trump determined that certain countries do not provide enough information to sufficiently vet their citizens' backgrounds.

The ban is needed to keep out "foreign nationals about whom the United States Government lacks sufficient information to assess the risks they pose to the United States," the president said in his September proclamation announcing the latest travel restrictions.

Hawaii Attorney General Douglas Chin said after the hearing that determining there's insufficient information to vet the foreigners is not the same as concluding their admission to the U.S. would be detrimental.

The government, he said, "didn't tell us why the existing system isn't working."

Citing national security concerns, Trump announced his initial travel ban on citizens of certain Muslim-majority nations in late January, bringing havoc and protests to airports around the country. A federal judge in Seattle soon blocked it, and courts since then have wrestled with the restrictions as the administration has rewritten them.

The latest version blocks travelers from the listed countries to varying degrees, allowing for students from some of the countries while blocking other business travelers and tourists, and allowing for admissions on a case-by-case basis. It also blocks travel by North Koreans along with some Venezuelan government officials and their families, although those parts of the restrictions are not at issue in the courts.

That assertion drew skeptical questioning from the judges, including a hypothetical from Gould: What if the president decided to bar anyone who's not a U.S. citizen?

Mooppan said even such a drastic action could not be reviewed by the courts unless Congress authorized them to do so.

Paez questioned the legitimacy of the administration's rationale for the restrictions, noting the exceptions for student visas: If those governments don't provide sufficient information, why allow anyone in?

Mooppan said the restrictions are carefully tailored to for each country, and designed in part to encourage them to be more forthcoming with the U.S. The exceptions also demonstrate the government is not engaged in banning Muslims, he said.

There was some discussion of the president's public statements concerning Muslims. Katyal noted that Trump continues to stoke anti-Islam sentiments. Last week he drew a sharp condemnation from British Prime Minister Theresa May's office when he retweeted a string of inflammatory videos from a fringe British political group purporting to show violence committed by Muslims.

Gould said the panel would rule "as soon as practical," noting the Supreme Court had suggested in its order this week that the appeals courts rule with appropriate urgency. Arguments are due to be held Friday before a full complement of 13 4th Circuit judges.