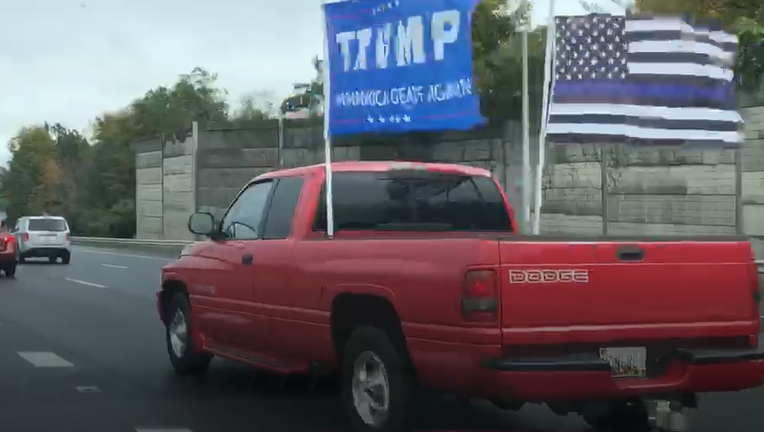 A viewer sent FOX 5 video of the "Trump Train" taking up the middle lane of I-495 Sunday afternoon in Northern Virginia.

CAPITAL BELTWAY - A "Trump train" of the president's supporters is taking up the middle lane of the Capital Beltway on Sunday afternoon.

And many fellow motorists aren't happy.

A viewer sent FOX 5 footage of the Trump supporter caravan. You can see a parade of cars driving slowly in single file in the middle lane of the three-lane highway:

A FOX 5 viewer sent us this video of Trump supporters driving slowly Sunday in the middle lane of Interstate 495 in Maryland.

The parade around the nation's capital follows another high-profile one Saturday in Texas, where Democrats say the Biden/Harris campaign had to cancel events because of cars with Trump flags surrounding a campaign bus for hours.

There was one reported "minor collision" during the caravan in Texas.

President Trump retweeted video of the caravan with the caption: "I LOVE TEXAS!"

Maryland State Police tell FOX 5 they have received numerous calls surrounding the Trump caravan, but had no incidents to report. FOX 5 is also reaching out to Virginia State Police.

Organizers wanted participants to drive slowly: no more than 35 miles-per-hour, with their emergency lights showing.

The footage FOX 5 obtained shows the caravan near an exit for the Baltimore-Washington Parkway, but organizers also planned "access points" in Northern Virginia and throughout our area.