WASHINGTON (AP) -- Twitter has taken the unprecedented step of adding fact-check warnings to two of President Donald Trump’s tweets that falsely called mail-in ballots “substantially fraudulent” and predicted a “Rigged Election.” On Wednesday, the president threatened to impose new regulation on social media companies or even to “close them down."

But Twitter’s move and Trump’s reaction raise a host of questions, including why Twitter acted now, how it decides when to use such warnings and what its newly assumed role means for the 2020 U.S. presidential election.

QUESTION: Twitter has resisted taking action on Trump's tweets for years, despite the president's history of spreading misinformation and abuse on the platform. What changed?

ANSWER: Trump has pushed Twitter's boundaries for years, using it to attack rivals, speak to his base and simply vent. Until Tuesday, he had never faced sanctions — though other world leaders had.

But things started to change earlier this year when coronavirus misinformation began to spread. Twitter began flagging tweets that spread disputed or misleading claims about the virus with “get the facts” links to more information, including news stories and fact checks. 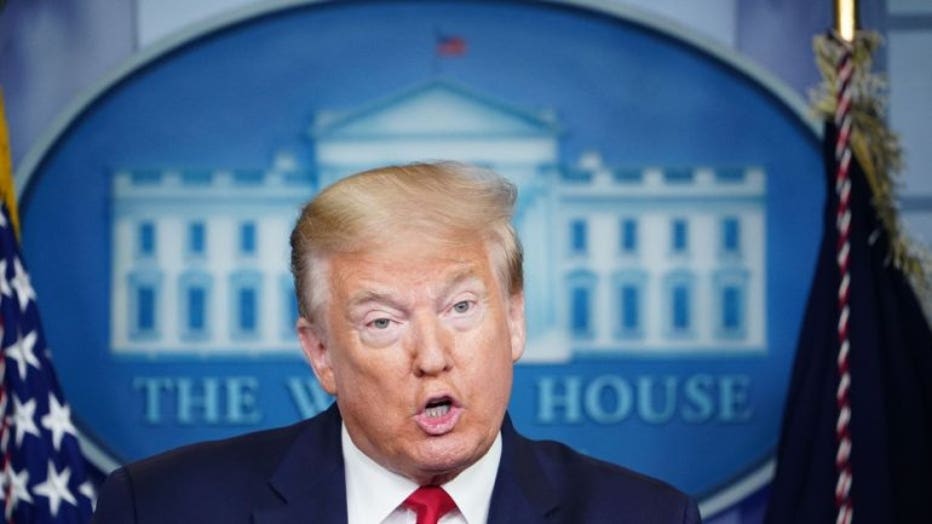 FILE - US President Donald Trump speaks to the press on May 22, 2020, in the Brady Briefing Room of the White House in Washington, DC. (Photo by MANDEL NGAN/AFP via Getty Images.)

Twitter said it would be adding such warnings to other tweets that could confuse users. Tweets deemed “harmful” would be removed altogether. Trump’s vote-by-mail tweets were the first non-pandemic ones Twitter flagged this way.

Those tweets met specific Twitter criteria for misinformation on certain topics, including the coronavirus, how to vote in elections and the census. There is no such policy for other topics. Earlier Trump tweets about Joe Scarborough, which baselessly suggested the television host and former GOP congressman had committed murder 20 years ago, didn't fall into a specific misinformation category, which is likely why they remain untouched.

Twitter's action is “indicative the public outcry reached such a fever pitch that the company feels like it has to take action," said Jennifer Grygiel, a communications professor at Syracuse University who uses they/them pronouns. It's a "sign that Twitter fears public opinion more than the president who cries wolf too often," they added.

QUESTION: Could Trump make good on his threats to regulate or even shut down social media companies? Could Congress or the Federal Communications Commission help him do this?

Jack Balkin, a Yale University law professor and First Amendment expert, said any attempt to regulate social media companies for the content on their site would likely need congressional input and approval — and would almost certainly face strong legal challenges. The FCC, meanwhile, has no jurisdiction over internet companies like Twitter.

What is clear, Balkin said, is the limit on Trump’s authority to impose his own rules. While the president could ask for an investigation or issue some type of executive order, he can’t override laws written by Congress and rooted in the constitution. But that's not the point, he said.

“This is an attempt by the president to, as we used to say in basketball, work the refs," Balkin said. "He’s threatening and cajoling with the idea that these folks in their corporate board rooms will think twice about what they’re doing."

Former federal judge Michael McConnell, who now directs Stanford Law School’s Constitutional Law Center, also said Trump lacks the legal power to back up his threat. “He has no such authority,” he said in an email. “He is just venting.”


QUESTION: Trump posted the same claim about mail-in ballots on Facebook Tuesday, but the company has taken no action. Does Twitter's decision raise the stakes for other social media companies?

ANSWER: Facebook has long resisted directly fact-checking politicians, including the ads they run on its site. The company has a policy against voter interference that includes misrepresenting “the dates, locations, times and methods for voting” among other things, but it hasn't applied these rules to Trump's post.

And Facebook, which works with news outlets including The Associated Press to fact check claims on its site, does not allow fact checks to be directly attached to Facebook posts by Trump or other politicians.

QUESTION: How does Twitter decide which tweets get flagged with the warnings? What happens to the tweets?

ANSWER: Trump's tweets got flagged after someone reported them. That could happen to anyone, but Twitter emphasizes that it can’t police every tweet. The company does make its own decision on the matter, unlike Facebook, which outsources such work to outside fact-checkers.

Tweets flagged this way are not demoted, hidden or “silenced” in any way, Twitter said.

Lisa Fazio, a psychology professor and misinformation expert at Vanderbilt University, said the fact-check link is “problematic” because it doesn't directly dispute false information in the tweets. On its own, she said, “'get the facts' could mean the president is right, and here’s the evidence. The refutation is pretty weak."

QUESTION: What does this mean for the 2020 U.S. presidential election?

Whether or not Twitter sticks with the practice depends on how much pressure the public and the media keep up, Grygiel said. It's also not clear how effective it will be.

“Some research shown labeling can make some people dig in more and resist it,” Grygiel said.