HELSINKI -- President Donald Trump and Russia's Vladimir Putin opened their long-awaited summit Monday with a wink and slouch, respectively, then talked one on one behind closed doors for two-plus hours before the American leader declared their meeting was off to a "very, very good start for everybody." 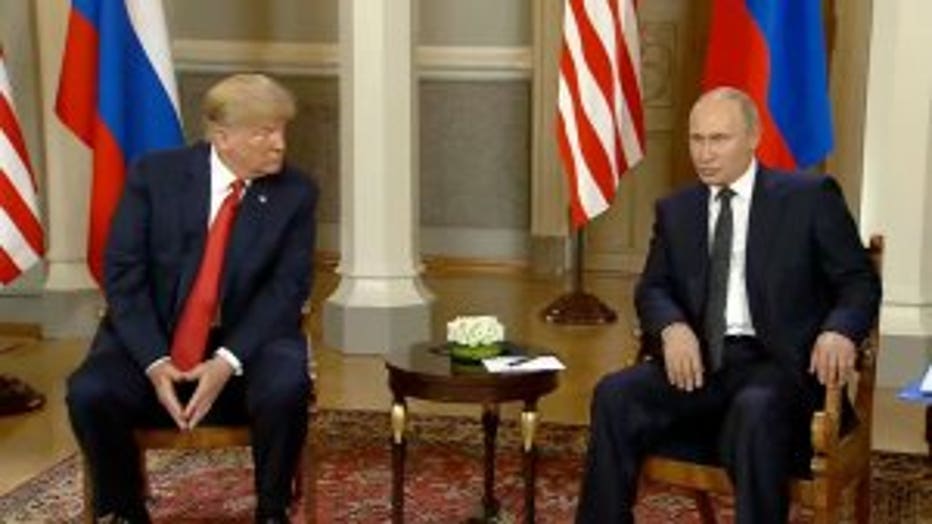 President Trump and Russian President Vladimir Putin speak at a summit on July 16, 2018 in Helsinki, Finland.

Neither leader revealed what was discussed. But in advance of the talks, Trump listed a series of topics that did not include Russian meddling in the 2016 presidential election.

"We have not been getting along well for the last number of years," Trump said after arriving at the Presidential Palace in Finland's capital, where the leaders are meeting. "But I think we will end up having an extraordinary relationship. ... I really think the world wants to see us get along."

Putin, for his part, said he and Trump have maintained regular contact through phone calls and meetings at international events but "the time has come to have a thorough discussion on various international problems and sensitive issues." He added: "There are quite a few of them for us to pay attention to."

Their opening one-on-one session had been scheduled to run 90 minutes. The Russians said it lasted two hours and 10 minutes. The White House wouldn't immediately confirm the timing.

The summit, which is being closely watched around the world, was not the first time Trump and Putin have held talks. They met on the sidelines of world leader meetings in Germany and Vietnam last year. But Monday's session was condemned in advance by members of Congress from both parties after the U.S. indictment last week of 12 Russian military intelligence officers accused of hacking Democrats in the 2016 election to help Trump's presidential campaign.

Trump said last week that he would raise the meddling issue again with Putin, but questions have been swirling about whether Trump will sharply and publicly rebuke his Russian counterpart for the interference that prompted a special investigation probe that Trump has repeatedly labeled a "witch hunt."

Addressing reporters before the one-on-one meeting, Putin struck a casual pose during Trump's remarks, slouching in his chair with his legs wide and eyes low. He nodded along to some of Trump's remarks before they were translated, showcasing his fluency in English. Trump leaned forward in his chair, his hands tented in front of him and frequently glanced over at the Russian president. At one point, he shot Putin a wink. After Trump concluded his remarks, American reporters shouted several questions about whether he would bring up election meddling during his discussions with Putin.

Trump did not respond; Putin appeared to smirk.

With that, the leaders gave a quick handshake and their private meeting in the opulent Gothic Hall was under way. Just the two of them, each with a translator.

They continued the discussion with an expanded group of aides and over lunch in the Hall of Mirrors, once the emperor's throne room. They'll conclude the summit by taking questions at a joint news conference.

The summit began just hours after Trump blamed the United States — and not Russian election meddling or its annexation of Crimea — for a low-point in U.S.-Russia relations. The drama was playing out against a backdrop of fraying Western alliances, a new peak in the Russia investigation and fears that Moscow's aggression may go unchallenged.

"Our relationship with Russia has NEVER been worse," Trump tweeted Monday morning, blaming "many years of U.S. foolishness and stupidity and now, the Rigged Witch Hunt!"

The Russian foreign ministry responded by liking Trump's tweet and then replying: "We agree."

The summit started late because Putin arrived in Helsinki about a half hour behind schedule in another display of the Russian's leader famous lack of punctuality. Trump seemed to return the favor by waiting until Putin had arrived at the palace before leaving his hotel. Putin has been late for past meetings with the pope and British queen, among many others.

Trump and his aides have repeatedly tried to lower expectations about what the summit will achieve. He told CBS News that he didn't "expect anything" from Putin, while his national security adviser said the U.S. wasn't looking for any "concrete deliverables." Trump told reporters during a breakfast Monday with Finland's president that he thought the summit would go "fine."

Observers have raised concerns about the fact that the leaders met alone during their first meeting, but for a pair of interpreters, meaning there will be no corroborating witnesses to accurately represent what was said during the conversation.

Trump said he and Putin would discuss a range of issues, from trade to the military, along with missiles and China. Not mentioned: Election meddling or Syria.

The Russian Foreign Ministry rejected last week's indictment as part of a "shameful comedy" they claim has been staged to prevent the normalization of Russia-U.S. ties.

In tweets Monday, Trump continued to undermine the investigation and blamed his predecessor, Barack Obama, for failing to stop Russia's efforts to sway the 2016 election in Trump's favor. He claimed Obama "was informed by the FBI about Russian Meddling, he said it couldn't happen, was no big deal, & did NOTHING about it."

The Obama administration did, in fact, take action, including confronting Putin in person as well as expelling nearly three dozen Russian diplomats the U.S. said were actually intelligence operatives and imposing new sanctions.

While Trump was eager for a made-for-TV moment that will dominate headlines like his sit-down with North Korean leader Kim Jong Un last month, Putin hopes the meeting, mere hours after he presided over the World Cup finals, will help him forge good personal ties with Trump and focus on areas where Moscow and Washington may be able to find common ground, such as Syria.

Putin will likely not be shooting for official recognition of Russia's 2014 annexation of Crimea or the easing of crippling U.S. sanctions, aware that the U.S. Congress would never allow such action. But he would welcome a symbolic end to Western protests over Crimea and Moscow's attempts to destabilize elections and traditional Western alliances and norms.

On Syria, a possible deal could see Moscow helping mediate the withdrawal of Iranian forces and their Hezbollah proxies from the areas alongside Syria's border with Israel — a diplomatic coup that would reflect Russia's carefully cultivated ties with both Israel and Iran.