WASHINGTON (AP) — Fending off the renewed focus on sexual harassment allegations against him, President Donald Trump lashed out at Sen. Kirsten Gillibrand on Tuesday, declaring the New York Democrat and frequent presidential critic had come to his office "begging" for campaign contributions and "would do anything" to get them.

A chorus of Democrats accused Trump of insinuations about Gillibrand that were unsavory at best.


Nothing of the kind, retorted White House press secretary Sarah Huckabee Sanders. She said "there is no way that this is sexist at all," and she suggested the tweet could be considered sexually charged "only if your mind is in the gutter."

Gillibrand, who had called for the president's resignation a day earlier because of allegations of sexual misconduct, called his attack a "sexist smear attempting to silence my voice." 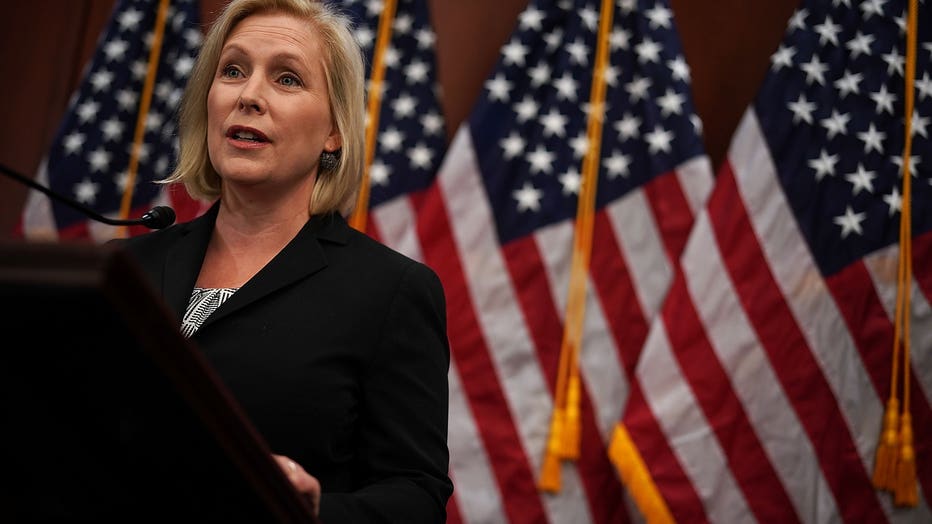 "I will not be silenced on this issue," she said. "Neither will the women who stood up to the president yesterday," referring to those who have accused the president of sexual harassment.

With nearly each week bringing new headlines about sexual misconduct forcing men from positions of power, the rising #MeToo movement has landed squarely at the front door of Trump's White House. A handful of Democratic senators have called for his resignation, nearly 60 lawmakers are urging a congressional probe into his behavior and some of the 16 women who have accused Trump of harassment have resurfaced their stories.

Gillibrand, one of the leading lawmakers advocating against sexual harassment and a potential 2020 presidential contender, was at a bipartisan Bible study session when a staffer alerted her to Trump's tweet, according to an aide.

Sen. Elizabeth Warren, D-Mass., another potential presidential contender, tweeted to the president: "Are you really trying to bully, intimidate and slut-shame @SenGillibrand? Do you know who you're picking a fight with? Good luck with that, @realDonaldTrump."

Trump's tweet Tuesday did not directly address sexual harassment, but said of Gillibrand: "Lightweight Senator Kirsten Gillibrand, a total flunky for Chuck Schumer and someone who would come to my office "begging" for campaign contributions not so long ago (and would do anything for them), is now in the ring fighting against Trump. Very disloyal to Bill & Crooked-USED!"

Sanders insisted that Trump meant to denounce Gillibrand's role within the Washington political culture and nothing more.

"The president is very obvious. This is the same sentiment that the president has expressed many times before when he has exposed the corruption of the entire political system," Sanders said during the White House press briefing. "If you look back at past comments that this president has made, he's used that same terminology many times in reference to men."

Trump frequently derides "the swamp" of campaign finance and he has previously tweeted about politicians "begging" for donations. In 2013, he wrote of New York's attorney general: "Why did lightweight A.G. Eric Schneiderman come to my office on numerous occasions begging for campaign contributions?"

Trump donated $4,800 to Gillibrand's Senate campaign in 2010, according to federal campaign finance records. Before launching his presidential campaign, he frequently bestowed donations on politicians of both parties.

His broadside against Gillibrand was the latest example of Trump hurling a provocative, if vague, attack that was open to interpretation, allowing him to distance himself from criticism that he's being inflammatory.

His tweet outraged Democrats, who said the president was again debasing a woman. Several Democratic senators have now demanded that Trump step down, including Hawaii's Mazie Hirono.

"He is a liar. He is an admitted sexual predator and the only thing that will stop him is his resignation," Hirono said. "He not only owes Kirsten an apology, he owes an apology to our entire country, particularly the women in this country."

The Democratic Women's Working Group held a news conference to demand that the House Oversight Committee investigate sexual misconduct allegations against Trump. Republican lawmakers, who control both houses of Congress, have indicated that such a probe is unlikely.

The criticism largely came from one side of the aisle: Republicans mostly remained silent about the tweet, with Arizona Sen. Jeff Flake, a frequent Trump critic, being an exception. He said, he "didn't think it was appropriate at all."

More than a dozen women came forward during last year's campaign to say that Trump had harassed them or worse, many speaking out in the wake of the "Access Hollywood" tape in which he is heard bragging about groping women. Several have spoken out again this week, saying that the #MeToo movement is an occasion to ensure he is held accountable.

White House aides have warily watched the movement sweep across Capitol Hill, fearful of another distraction for a president saddled with poor approval numbers and a thin legislative track record.

And the president is said to have fumed when Nikki Haley, the U.S. ambassador to the United Nations, said in a weekend interview that the president's accusers' voices "should be heard." His reaction was described by two people who are familiar with his views but who spoke on condition of anonymity because they weren't authorized to speak publicly about private conversations.

Trump has denied the women's claims. In a heated exchange with reporters on Monday, Sanders said anew that the issue had been settled in Trump's favor on Election Day.

Sanders also promised that the White House would provide a list of eyewitnesses and corroborating evidence to exonerate Trump. Nearly 24 hours later, the White House sent along an email that, citing news reports that quoted witnesses, offered rebuttals to two of the accusations.