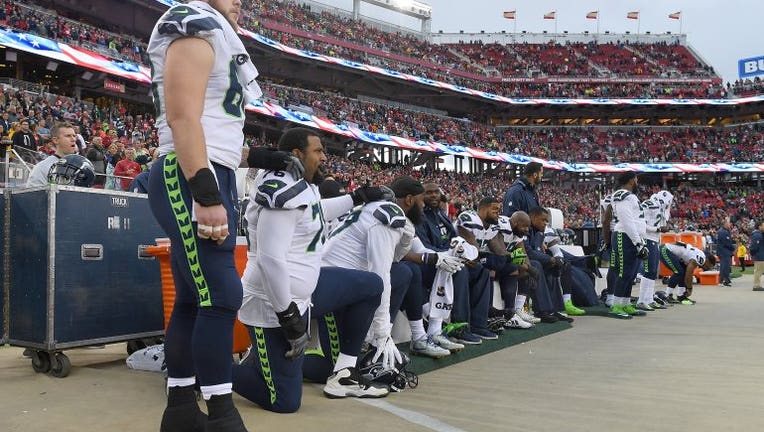 Several Seattle Seahawks players sits on the bench and kneel during the playing of the National Anthem prior to the start of their NFL game against the San Francisco 49ers at Levi's Stadium on November 26, 2017 in Santa Clara, California. (Photo by T

WASHINGTON, D.C. -- President Donald Trump is renewing his complaints about NFL players who kneel during the national anthem.

Players have been kneeling to protest racism and police brutality, particularly toward people of color. Trump says the act is disrespectful and is hurting the game.

Trump tweeted Tuesday that at least 24 players kneeled during weekend play at stadiums that he says are having a hard time filling with fans.

The president says: "The American public is fed up with the disrespect the NFL is paying to our Country, our Flag and our National Anthem. Weak and out of control!"

Trump has branded the league as "weak" for not requiring players to stand during "The Star-Spangled Banner."

NEXT: Marshawn Lynch sat during U.S. anthem but stood during Mexican anthem